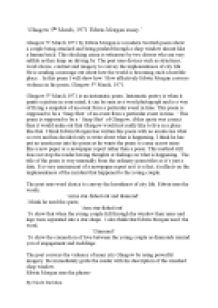 ﻿?Glasgow 5th March, 1971 Edwin Morgan essay.? Glasgow 5th March 1971 by Edwin Morgan is a modern Scottish poem about a couple being attacked and being pushed through a shop window almost like a human brick. This shocking crime is witnesses by two drivers who are very selfish as they keep on driving by. The poet uses devices such as structures, word choice, contrast and imagery to convey the unpleasantness of city life. He is sending a message out about how the world is becoming such a horrible place. . In this poem I will show how ?How effectively Edwin Morgan conveys violence in his poem, Glasgow 5th March, 1971. Glasgow 5th March 1971 is an instamatic poem. Instamatic poetry is when it paints a picture in your mind; it can be seen as a word photograph and is a way of fixing a snapshot of an event from a particular event in time. ...read more.

The poet uses word choice to convey the horridness of city life. Edwin uses the words, ?Arms star-fished out and diamond?. I think he used the quote, ?Arm star-fished out? To show that when the young couple fell through the window their arms and legs were separated into a star shape. I also think that Edwin Morgan used the word, ?Diamond? To show the connection of love between the young couple as diamonds remind you of engagement and weddings. The poet conveys the violence of inner city Glasgow by using powerful imagery. He immediately grabs the reader with his description of the smashed shop window. Edwin Morgan uses the phrase- ?Wet-look white coat? This makes you instantly think of a wet looking coat. This is also a form of irony as it was ironic of a white coat to get covered in red blood. Another quote of imagery is when Edwin uses the words ?Ragged diamond? This makes immediately think about how the window was broken, like the shape of the glass was broke and looked like a diamond shape. ...read more.

In this essay I have talked about structure, form, word choice, imagery, sound techniques and metaphors. The methods convey a good persona of Glasgow as it shows how bad the violence is. I feel pretty disappointed in the main theme of the poem is that lots of people would people would just carry on with their lives now and do not help people in need. It also makes you think of selfish people are to witness something so horrifying to keep driving on. On the whole I did enjoy reading the poem and it was really interesting finding out about all the different method Edwin used in his poem and to see all the thought and effort he put into it. Unfortunately this poem has changed my views on Glasgow. This poem has made me realised how dangerous the city can be. It has not changed my views that much on the people though, as I have heard a lot of worse things happening In the City of Glasgow but I?m still frustrated by the self-centredness of some of the people in the poem. By Nicole Davidson ...read more.