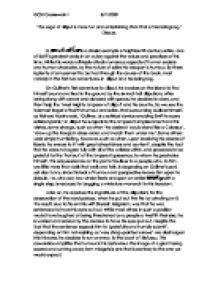 Gulliver's Travels. The saga of Lilliput is more fun and entertaining than that of Brobdingnag. Discuss.

'The saga of Lilliput is more fun and entertaining than that of Brobdingnag.' Discuss. Gulliver's Travels is a classic example of eighteenth century satire, one of Swift's greatest works in an outcry against the values and practices of his time. While his words ruthlessly attack numerous aspects of human society and human character, by the nature of satire his weapon is humour. So there is plenty of amusement to be had through the course of the book, most notably in the first two adventures, in Lilliput and Brobdingnag. On Gulliver's first adventure to Lilliput, he awakes on the island to find himself bound and tied to the ground by the six-inch tall Lilliputians. After being stung with arrows and stabbed with spears, he decides to obey, and then help the 'Most Mighty Emperor of Lilliput' and his country. So we see the foremost target of Swift's humour and satire, that surrounding Gulliver himself, as Richard Rodino said, 'Gulliver...is a satirical device enabling Swift to score satirical points.' In Lilliput he subjects to the Emperor's imprisonment and his wishes, some strange, such as when 'he desired I would stand like a Colossus', 'draw up the troops in close order, and march them under me'. Some others were simply humiliating, however, such as when, upon receiving his decree of liberty, he swears to it 'with great cheerfulness and content', despite the fact that he does not agree fully with all of the articles within, and proceeds to be grateful for the 'honour' of the Emperor's presence, to whom he prostrates himself. ...read more.

While one could find comedy in this passage, it is much cruder and less funny than similar passages in Lilliput, a typical example of the type of humour found in this second adventure. Although Swift is satirising our fascination with beauty and appearances, the power of this extract stems not from underlying implications but from the shock of having the human body so cruelly assaulted. Thus, instead of subtly hinting his satire as he does in Lilliput, Swift takes a far harsher line in Brobdingnag, using Gulliver to demonstrate the shortcomings and failings of the human race, through the medium of his various adventures there. It's always entertaining when you're dealing with those smaller and weaker than you are, but a great deal less funny when it's someone more powerful dealing with you. The affairs and events which occur in the two adventures also contribute a great deal to the humour. When Gulliver is in Lilliput, one of the first curious things he relates to us is the practice of choosing ministers for governmental and court positions by the nominee's skill at dancing on a tightrope or leaping under or over the Emperor's stick. This idea seems ridiculous to us, it probably elicited a few smirks when you first read it, but Swift is alluding to the way that in his day and age, many government officials achieved their positions from skill with words or putting money in the right places. ...read more.

sees through the pompousness and self-importance of Gulliver's account of Europe, seeing the corruption in government, the prejudice in law, the inefficiency in politics, the mismanagement of the economy. Swift is hinting that the two situations are not so different, since little people tend to place great significance upon little things, and when we are the little ones, it is brought home to us that the vast majority of our affairs are of little consequence in the long run. While the story found in Gulliver's Travels is highly entertaining, it is, primarily, a work of satire, and this adventure is designed as a message to the people and government of Swift's 18th century Britain, to change, or even just to reflect upon, the way in which they go about their lives. Upon reading both Lilliput and Brobdingnag, there is an evident trend in how Swift has written his book. In Lilliput, Swift uses engaging, fine humour to disguise his satire, whereas in Brobdingnag he moves onto rougher, coarser humour, with a far more obvious attack on European society, a trend which is continued through to the end of the book, culminating in a scathing assault on our perceptions of human nature itself, in the fourth adventure. Therefore, due to the ways in which we respond to the portrayal of Gulliver, and the events and humour found in the two passages, I conclude that the saga of Lilliput is funnier and more entertaining than that of Brobdingnag. ...read more.