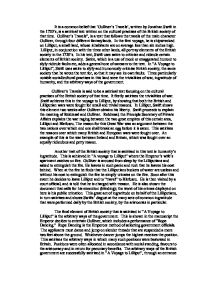 It is a common belief that 'Gulliver's Travels', written by Jonathan Swift in the 1720's, is a satirical text written on the cultural practises of the British society of that time. Gulliver's Travels", is a text that follows the travels of the main character Gulliver, through four different fantasylands. In the first voyage, he is shipwrecked on Lilliput, a small land, whose inhabitants are on average less than six inches high. Lilliput, in conjunction with the three other lands, all portray elements of the British society in the 1720's. In his text, Swift uses satire to criticise and ridicule certain elements of British society. Satire, which is a use of mock or exaggerated humour to slyly ridicule faults etc, adds a general tone of sarcasm to the text. In "A Voyage to Lilliput", Swift uses satire to slyly and humorously criticise British society, the same society that he wrote the text for, so that it may see its own faults. ...read more.

Another trait of the British society that is satirized in this text is humanity's ingratitude. This is achieved in "A voyage to Lilliput" where the Emperor's wife's apartment catches on fire. Gulliver is aroused from sleep by the Lilliputians and asked to extinguish the fire. He leaves in such panic and rush that he leaves his coat behind. When at the fire he finds that the Lilliputians buckets of water are useless and without his coat to extinguish the fire he simply urinates on the fire. Soon after this event he decides to leave Lilliput and to "travel" to Blefuscu. He is then visited by a court official, and is told that he is charged with treason. He is also shown the document that calls for his execution (blinding); the worst of his crimes displayed on here is his public urination. This great act of ingratitude on behalf of the Lilliputians, in turn satirizes and shows Swifts' disgust at the many acts of common ingratitude that were performed daily by the British society, by the aristocrats in particular. ...read more.

This chapter, which implicitly describes improvements that could be made in European society, is less satirical and ironic than the previous chapters. We may infer that Swift approves of many of these institutions. Clearly, there is a good case to be made for treating fraud as a more serious crime than theft and for making false testimony a capital crime. The very fabric of society depends upon trust, so dishonesty may be even more damaging than theft and violence. In general, the customs of Lilliput that Swift presents as good are those that contribute to the good of the community or the nation as opposed to those that promote individual rights or freedoms. Ingratitude is punishable by death, for instance, because anybody who would treat a benefactor badly must be an enemy to all mankind. Children are raised by the community rather than by their parents because parents are thinking only of their own appetites when they conceive children. Children are raised in public nurseries, but parents are financially penalized if they burden society by bringing children for whom they cannot pay into the world. ...read more.