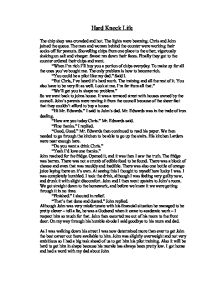 Hard Knock Life The chip shop was crowded and hot. The lights were beaming. Chris and John joined the queue. The man and woman behind the counter were working their socks off for peanuts. Shovelling chips from one place to the other, vigorously shaking on salt and vinegar. Sweat ran down their faces. Finally they got to the counter ordered their chips and went. "When I'm rich I'll buy you a portion of chips everyday. To make up for all the ones you've bought me. The only problem is how to become rich. "You could be a pilot like my dad." Said I. "But Chris, I've heard it's hard work. The training and all the rest of it. You also have to be very fit as well. Look at me. I'm far from all that." "We'll get you in shape no problem." So we went back to johns house. It was a terraced street with houses owned by the council. John's parents were renting it from the council because of the sheer fact that they couldn't afford to buy a house. "Hi Mr. Edwards." I said to John's dad. Mr. Edwards was in the trade of iron dealing. "How are you today Chris." Mr. Edwards said. ...read more.

At the end of the day I popped the question to him once more. This time I got a much better reply. "Of course I will." This was one great obstacle I had overcome. "Fantastic. Come over my house tonight and we'll fill in the application form." We arrived at my house. My dad was sitting in the front room awaiting our arrival. "Where do I sign." John asked my dad even before he had said hello. It's amazing the difference six hours of compliments does to someone's head. "One step at a time son." My dad replied with a smile and a wink to me. "How much do you want this John?" my dad asked. "A lot Mr. Fields." John replied. "How much do you really want it?" my dad enthused. "Stop encouraging him dad." I said. A few minutes later and the formalities were over. "Don't let me down John." My dad said putting one arm around him. "Don't worry Mr. Fields, I won't." John replied. "You do my bit Johnny boy and I'll do my bit. I'll be able to pull a few strings here and there, but that's the limit. You and you only will have to do the interview and the fitness test. ...read more.

"Are you serious." I replied slightly perplexed. "Of course I'm serious." "You got yourself a deal then." For the first time ever John was betting money and it was a fair sum also for him. How could he afford it? I thought to myself. I knew I could beat him but for his sake I let him run ahead so that he would eventually beat me. Also so I wouldn't put him out of pocket. �5 is a lot to him. So everything went along to plan and everyone was happy. This also gave him a confidence boost ahead of tomorrow. "John." I said to him. "Just one word of advice for you. Do us proud." "Sure will Chris." Today was the big day. All for the rest of the day I couldn't help but think how John was fairing. It was getting a bit on now and the day was far from young. In fact it was nearly my bedtime. The doorbell went. It was John. "I got it." He shouted. "Come again one more time please?" I asked to make sure I weren't dreaming. "I got the job Chris." "Fantastic. Well done mate, this calls for a celebration." "Remember when I said to you that when I became rich I'll buy you a portion of chips every day. Well it looks like I'll be able to fulfil that promise after all." "Lets hope so then. Lets hope so." ...read more.