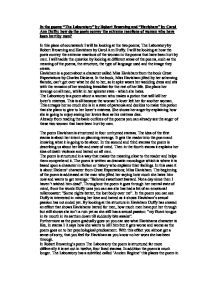 A metaphor is used to describe the power she has with what she's doing: "To carry pure death in an earring", this actually gives the poem a sense of fright and it starts to kick in how mad this woman is and what she's willing to do just to get back at her lover. Also with the rhymed AABB scheme the poem has the momentum it gets when starts to make the poem sound close to a song read out aloud, this contrasts the themes of the poem. In stanza six Browning uses repetition again effectively to show the power of the potion: "her head And her breast and her arms and her hands, should drop dead!" Once again we see how aggressive the woman is about making this potion. In stanza seven we see that the woman is a bit of a perfectionist as she complains about the potion not being the right colour: "The colour's too grim! Why not soft like the phial's, enticing and dim?" She is upset about this as she wants the potion to be bright as it will lighten up her drink: "let her turn it and stir, And try it and taste, ere she fix and prefer!" The reader starts to sense the woman envisaging how the poison will hurt the mistress. Stanza eight describes the other woman and how she is jealous that they are more powerful than her. Could she be making the potion as extravagant as she is doing so she can feel the power that they do? ...read more.

In addition the way the poem has rhythm and carries a strong beat gives the reader a sense this plan is growing momentum with the woman. In Havisham, to get a resounding effect on the reader Duffy has used language that creates an intense atmosphere between Havisham and the man that jilted her. This intensity is passed on to the reader and makes the reader think mixed emotions about Havisham, should they feel sorry for her for what she ahs been through or should they think she is evil the way she wants to kill the man. Furthermore the way that the poem is written unrhymed creates the effect that it is speech and that it is like a story, this is maybe to make the poem more warming. In conclusion I consider the poets have conveyed the extreme reactions of woman who have been hurt by men numerous different ways but have done it very effectively on the reader. The way the both poems are structured, even though each poem is structured differently they both create an effect on the reader. The type of language used shows what these men have done to the two woman in the poem and show what the woman feel, and how they want to get revenge. Finally the image both the poems put in the readers mind shows how well these two poets have conveyed the extreme reactions of the two women, as you can clearly see by reading the two poems both woman have been put through a lot of pain and hurt, and they want revenge because of it. ...read more.