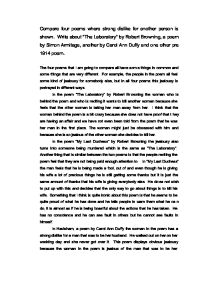 Compare four poems where strong dislike for another person is shown. Write about &quot;The Laboratory&quot; by Robert Browning, a poem by Simon Armitage, another by Carol Ann Duffy and one other pre 1914 poem.

Compare four poems where strong dislike for another person is shown. Write about "The Laboratory" by Robert Browning, a poem by Simon Armitage, another by Carol Ann Duffy and one other pre 1914 poem. The four poems that I am going to compare all have some things in common and some things that are very different. For example, the people in the poem all feel some kind of jealousy for somebody else, but in all four poems this jealousy is portrayed in different ways. In the poem "The Laboratory" by Robert Browning the woman who is behind the poem and who is reciting it wants to kill another woman because she feels that the other woman is taking her man away from her. I think that the woman behind the poem is a bit crazy because she does not have proof that they are having an affair and we have not even been told from the poem that he was her man in the first place. The woman might just be obsessed with him and because she is so jealous of the other woman she decides to kill her. In the poem "My Last Duchess" by Robert Browning the jealousy also turns into someone being murdered which is the same as "The Laboratory". ...read more.

She also let herself get obsessive which she did not have to do and she could of got on with her life and maybe forget about her wedding day, rather than letting it take over her life completely. In "Kid" the dislike did not really have that much of an impact on Robin's life and he was saying that he was getting on with his life. This is completely the opposite from "Havisham". The individual from the "The Laboratory" was quite obsessive over her hatred and she became so obsessive that she found that the only way to resolve her problem was to kill the person that she hated. Although she was quite calm about what she was going to do. In the poem "My Last Duchess" the mans jealousy took over him and he also killed. After he had done so he got on with his life quite quickly and planned to re-marry. Although he always thought about his last duchess and told other people about her. In all poems you can hear the person reciting the poem. This illusion of speech is caused in many different ways. A way that is successful and the poet's use often is punctuation or the lack of punctuation. ...read more.

The poet here could be writing it about dislike and hatred to show some kind of irony and sarcasm. The whole way through the poem sarcasm has been shown and there has also been the use of an oxymoron. " Beloved sweetheart b*****d". When you read this you can imagine the woman saying this gently to start off with and then suddenly cuts off the sentence sharply with the word b*****d. Oxymorons are also used in other poems where a loving word is followed by a word to do with hatred. Something else that I think is ironic is that in the poem "The Laboratory" the poem is written in quite a jaunty rhythm but the poem itself is not jaunty but is actually the complete opposite. Imagery was used in all four poems. In the poem "My Last Duchess" a few similes were used "As if she were alive". This is a simile because she was not alive but it was like she was. In "The Laboratory" metaphors are used. For example "those masculine eyes". In "Havisham" a metaphor is also used "I've dark green pebbles for eyes". In "Kid" a simile is used in the sixth line, "he was like a father to me". Something else that is the same in all four poems is that they are written in the first person. ...read more.