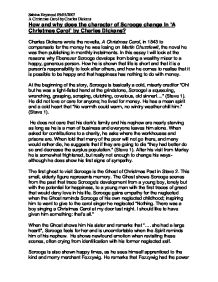 How and why does the character of Scrooge change in 'A Christmas Carol' by Charles Dickens?

How and why does the character of Scrooge change in 'A Christmas Carol' by Charles Dickens? Charles Dickens wrote the novella, A Christmas Carol, in 1843 to compensate for the money he was losing on Martin Chuzzlewit, the novel he was then publishing in monthly instalments. In this essay I will look at the reasons why Ebenezer Scrooge develops from being a wealthy miser to a happy, generous person. How he is shown that life is short and that it is a person's responsibility to look after others, and how he comes to realise that it is possible to be happy and that happiness has nothing to do with money. At the beginning of the story, Scrooge is basically a cold, miserly creditor "Oh! but he was a tight-fisted hand at the grindstone, Scrooge! a squeezing, wrenching, grasping, scraping, clutching, covetous, old sinner!...." (Stave 1). He did not love or care for anyone; he lived for money. He has a mean spirit and a cold heart that "No warmth could warm, no wintry weather chill him." (Stave 1). He does not care that his clerk's family and his nephew are nearly starving as long as he is a man of business and everyone leaves him alone. When asked for contributions to a charity, he asks where the workhouses and prisons are. When told that many of the poor will not go there, and many would rather die, he suggests that if they are going to die "they had better do so and decrease the surplus population." ...read more.

The spirit displays abundance but is also slowly dying, thus representing the many opportunities (and missed opportunities) to care for others and how big the world is. When the Ghost of Christmas Present introduces himself, Scrooge declares that he is willing to accompany him because he wants to learn. ".... I went forth last night on compulsion, and I learnt a lesson which is working now. To-night, if you have aught to teach me, let me profit by it." When shown the present, he is overcome by pity for a few moments about Tiny Tim and Cratchit's wretched household, and in awe at the people he sees that are happy even though they are poor. He begins to pity himself a little more because he sees how happy others are. He is beginning to repent, especially when he asks if Tim will live. "Spirit," said Scrooge, with an interest he had never felt before, "tell me if Tiny Tim will live." Having witnessed the family Christmas celebration, Scrooge realises that he does not have the right to choose who lives or dies and is overcome with remorse and sorrow when he hears his own words quoted by the Spirit. "... If he be like to die, he had better do it, and decrease the surplus population." When he is shown Ignorance and Want, he begins to realize how harsh he has been and is already beginning to change his thinking. ...read more.

He is not trying to just save himself (he would have put his name on the turkey if he was), he really wants to make a difference. He treats Cratchit kindly, and visits his nephew. In fact he becomes a good man to all of the people he has let down, and in his actions and change of heart he is redeemed. As a result of his transformation, Scrooge becomes a better master to Cratchit, a second father to Tim and a real member of the family to Fred. A Christmas Carol has become one of his most popular works, not least because it has been produced several times as a film or on television and, in most years, it is dramatised in theatres around the country at Christmas as a children's production to rival the standard Christmas Pantomimes. The novel does raise the kinds of social issues in many of Dickens' other works, but without the sharp critical edge and with a great deal more lightness and sentimentality, hence it is not generally given the serious critical analysis which many of his other works are afforded. 'A Christmas Carol' may not be one of Dickens' more serious or socially challenging novels, but through the transformation of his central character, the author is able to prompt in readers the same kind of reflection on Victorian society as he does in some of his other work. Sabina Heywood 09/05/2007 A Christmas Carol by Charles Dickens ...read more.