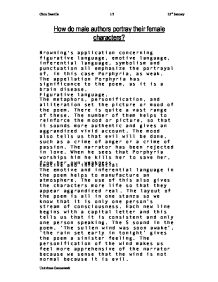 How do male authors portray their female characters?

How do male authors portray their female characters? Browning's application concerning figurative language, emotive language, inferential language, symbolism and punctuation all emphasize the portrayal of, in this case Porphyria, as weak. The appellation Porphyria has significance to the poem, as it is a brain disease. Figurative language. The metaphors, personification, and alliteration set the picture or mood of the poem. There is quite a vast range of these. The number of them helps to reinforce the mood or picture, so that it sounds more authentic and gives an aggrandized vivid account. The mood also tells us that evil will be done, such as a crime of anger or a crime of passion. The narrator has been rejected in love. When he sees that Porphyria worships him he kills her to save her, from her own weakness. ...read more.

Night/ Storm = Passion 'The storm set in early tonight' Porphyria = Angelic "in glided Porphyria' Sexy/alluring = hair Golden/long = Religion/angel 'God has not said a word' The fact that the narrator wound Porphyria's hair three times around her neck is significant as it has a link to the three witches in Macbeth. The first of these spun the thread of life, the second wove it, and the third cut it. By saying this, the narrator may be trying to infer that he is either, Above God or he is God and can manipulate fate. He makes another reference to this in the last few lines of the poem when he says 'And yet God has not said a word.' The narrator is very possessive ' As a shut bud tat holds a bee'. ...read more.

The fact cannot be changed. Conclusion Porphyria is portrayed as angelic, "in glided Porphyria", innocent "perfectly pure and good", and na�ve because she goes to him on her own during a storm. Porphyria is the name of the disease of the mind. The narrator must have the disease, as Porphyria is sane. The narrator has a warped mind and he believes he is above God although he is very religious. Porphyria is the victim of murder and this shows that Browning thought that women were weak, as she could not prevent him from murdering her. The era also has significance because society, at that time, would not allow a single woman to visit a single man at night. In my opinion, women are not weak, as many women have done amazing things. For example Denise Louis is a major athlete and the takes a lot of strength to do. Chris Deaville 1/3 23rd January Unit three Coursework ...read more.