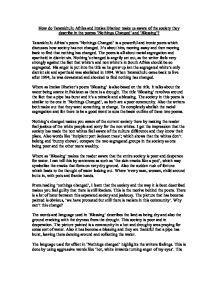 How do Tatamkhulu Afrika and Imtiaz Dharker make us aware of the society they describe in the poems 'Nothings Changed' and 'Blessing'? Tatamkhulu Africa's poem 'Nothings Changed' is a powerful and ironic poem which discusses how society has not changed. It's about him, moving away and then moving back to find that nothing has changed. The poem is all about racial segregation and apartheid in district six. Nothing's changed is angrily set out, as the writer feels very strongly against the fact that white's and non white's in South Africa should be so segregated. His anger is put into the title as he grew up ion the segregated white's only district six and apartheid was abolished in 1994. When Tatamkhulu came back to live after 1994, he was devastated and shocked to find nothing has changed. Where as Imtiaz Dharker's poem 'Blessing' is also based on the title. It talks about the water being scarce in Pakistan as there is a drought. The title 'Blessing' revolves around the fact that a pipe has burst and it's a miracle and a blessing. ...read more.

Why can't this change? The words and language used in 'Blessing' describes the land as being dry and also the ground cracking with the dryness from the drought. This society is poor and in desperation. The picture painted is a community in a hot and droughty area praying for some sort of water. Also it has become a blessing and they are thankful that a pipe has burst, leaving them dancing around and collecting the water. The language used for effect in 'Nothings changed' highlights the writers feelings. This is done by using aggressive words like 'hot, white inwards turning anger of my eyes'. The short sharp words at the start of that sentence gives off aggression. He also feels upset about the blood shed in South Africa over the segregation. I can tell this from looking at two lines, 'linen falls, the single rose'. This would be symbolism being used to describe the blood shed and death. Tatamkhulu'a emotions really come out in this poem. 'hands burn for a stone, a bomb, to shiver down the glass'. ...read more.

Where as Tatamkhulu comes back to discover that she has been misled and there is still a strong racial divide between the whites and non whites. This is where she uses the title to sum up her thoughts. (Nothing's changed). This quote extracted shows that ii is said the segregation has been abolished and there is no more racial anger, but she knows there still is. 'No board says it is: but my feet know. Also 'no sign says it is: but we know where we belong', is an example of this false factor said. The poem 'Blessing' talks about the drought and deep desperation in this poor society and then leads to the 'sudden rush 'of joy from a water pipe bursting. Imatiaz has wrote this describing it in exaggerative words too make you feel sorry and relieved about the pipe burst. 'Screaming in the liquid sun', describes children rushing around and enjoying themselves in the baking heat. Out of the two poems I read, I preferred 'Nothings changed'. This is because I felt more emotionally involved. The poem was a lot more interesting to me and I understood what was happening from different views. ...read more.