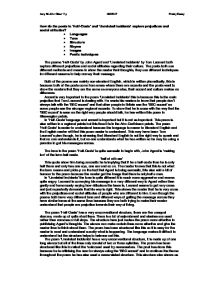 How do the poets in 'Half-Caste' and 'Unrelated Incidents' explore prejudices and social attitudes?

How do the poets in 'Half-Caste' and 'Unrelated Incidents' explore prejudices and social attitudes? * Languages * Tone * Structure * Rhyme * Images * Poetic techniques The poems 'Half-Caste' by John Agard and 'Unrelated Incidents' by Tom Leonard both explore different prejudices and social attitudes regarding their culture. The poets both use different methods and means to show the reader their thoughts, they use different techniques for different reasons to help convey their message. Both of the poems use mainly non-standard English, which is written phonetically, this is because both of the poets come from areas where there are accents and the poets want to show the readers that they are the same as everyone else, their accent and culture makes no difference. Accent is very important in the poem 'Unrelated Incidents' this is because this is the main prejudice that Tom Leonard is dealing with. He wants his readers to know that people don't always talk with the 'BBC accent' and that other people in Britain see the 'BBC accent' as some people see the stronger regional accents. To show that he is cross with the way that the 'BBC accent' is seen as the right way people should talk, he has written this poem in Glaswegian patois. ...read more.

There is a lot of enjambment and slashes are used rather then commas or full stops. The structure here just makes the poem more effective in publicising Agard's thoughts. The stanza can make certain lines more effective and give the reader time to think about them. The poem has been structured like this so it is easy for the reader to read and understand exactly what is happening. The language makes it difficult to understand but the structure helps to balance out this. The poem 'Unrelated Incidents' has a very unconventional structure, it is made up of one long stanza but all of the lines only consist of two or three syllables. The poem has been structured like this to reflect the 'autocues' used by newsreaders. The poet has done this because he is criticising the new for always using the 'BBC accent' and to continue the theme throughout the poem he has also used a news-related structure. This structure also shows us that the poet was angry when he wrote this because the short lines make the poem move a lot quicker and the fast pace of the poem gives the reader the impression of anger. Apart from the fastened pace and the relations to 'autocues' the structure doesn't really help us understand how the poet explores the prejudices and social attitudes, in either poem. ...read more.

These metaphors are very good at making the reader think and proving his point. 'yu mean when picasso mix red an green is a half-caste canvas' This is one of the metaphors he uses and it does prove that the term is ridiculous, because mixing two colours makes a new colour just as mixing two races make a new race. Agard shows this prejudice towards mixed race people by being sarcastic, but also uses metaphors, repetition and non-standard punctuation and language to create the "picture" that people of mixed races are labelled unfairly in most social environments. 'Unrelated Incidents' doesn't use many poetic techniques. This could be because the poet, Leonard, wanted the readers to think that he is in a lower class and less able academically because he wants to emphasis the stereotype that the Scottish accent is put into. The only technique that Leonard uses is the non-standard, phonetically spelt language, this adds emphasis to the stereotype as well. Together both poets use a lot of different techniques and methods to show that they feel that the groups of people they are writing about are under prejudices from people around them. Both poets feel that general social attitudes are against these groups of people and that these attitudes are pointless. Even though the poets are doing the same "task" they are both using different means of showing their feeling to their audience. Amy St.John Glew 11p 06/05/07 Poetry Essay ...read more.