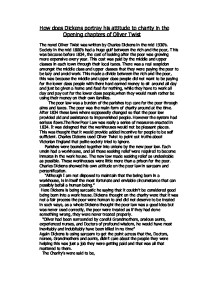 How does Dickens portray his attitude to charity in the

How does Dickens portray his attitude to charity in the Opening chapters of Oliver Twist The novel Oliver Twist was written by Charles Dickens in the mid 1930's. Society in the mid 1800's had a huge gulf between the rich and the poor, This was because before 1834, the cost of looking after the poor was growing more expensive every year. This cost was paid by the middle and upper classes in each town through their local taxes. There was a real suspicion amongst the middle class and upper classes that they were paying the poor to be lazy and avoid work. This made a divide between the rich and the poor, this was because the middle and upper class people did not want to be paying for the lower class people with there hard earned money to sit around all day and just be given a home and food for nothing, while they have to work all day and pay out for the lower class people,when they would mush rather be using their money on their own families. The poor law was a burden of the parishes top care for the poor through alms and taxes. The poor was the main form of charity around at the time. After 1834 these laws where supposedly changed so that the poor law provided aid and assistance to impoverished people. However the system had serious flaws.The New Poor Law was really a series of measures enacted in 1834. It was deisgned that the workhouses would not be pleasant places. This was thought that it would provide added incentive for people to be self sufficient. Charles Dickens used Oliver Twist to point out truths about Victorian England that polite society tried to ignore. Parishes were bounded together into unions by the new poor law. Each unoin had a workhouse, and all those seeking relief were required to become inmates in the work house. ...read more.

The parish hired the cheapest people to manage the workhouses, who's jobs were therefore never done to the best ability. All they were concerned about was being paid to them the patient was just another number to there pay slip, as they got paid for how many patients they took care of. They didn't care what happened to the patient after they and given them all they had to give them, to them this was just a way of making money it wasn't about helping people. "She imprinted her cold white lips passionately on its forehead" Dickens is trying to show you the mothers love for her child, she is passionate about him. He uses this to compare the differences between how the doctors and nurses treat the child. This is the first positive image used, she is passionate about her son. In comparison to the manager of the workhouse the coldness they give a child born into the workhouse. This is the first moment anyone engenders any emotion in anyone. This is quickly followed by his mothers death, Dickens is trying to show you that the only good thing in the babies lives can be taken away as quick as that. This is compared in the same way that she is an unmarried woman, the love of her family would have been taken away when found she was pregnant. The workhouse is a better place for her to do die, anonymously, but with the love of her child, instead of with the family who are supposed to love her, but because of her error have taken that love away from her. Dickens is trying to widen the view of charity, charity starts at home, if this does not exist their how can a charity that doesn't give you the love and support a home does help you through the bad times ahead, if not even your family will. ...read more.

portrayed here, is that, Oliver got punished for wanting a little more food, he makes it seem as though you are a bad person for asking for more, you get what your given. The "masters" response to this is very violent, he should not have you've such an intense punishment on a young boy. Charity's have changed dramatically since the 1800's, but still today, the novel of Oliver Twist is still socially relevant today. There is still people in the 21st century that think they are better than others and therefore can control them, obviously not to the extent, that is portrayed in Oliver Twist, there is a message to the modern reader in Oliver Twist, and that is, we all do come into this world the same way, but we may have different back grounds and lifestyles, but we all deserve to be treated the same. Charles Dickens wrote the novel of Oliver Twist to put across his views on the charity, and the way it worked. He wants to show his reader, his feelings on how people, where treated in relation to their backgrounds. He basically wanted to tell people how he felt about the charity's and the way they were run. I think Charles Dickens, did not think of the poor law as a charity, more of a prison, for people who were not as well off as others. You follow the life of a young boy Called Oliver, through his life in the workhouse and out of it, and how badly mistreated he was because of what he was. Even the people who were said to be helping the poor, were just there for the money, they didn't care what happened to any of these people. Charles Dickens is attempting to say that, the poor law was no such charity, charity starts at home and those less fortunate to not have one were taken to workhouses were they were treated like they had done something wrong. ?? ?? ?? ?? ...read more.