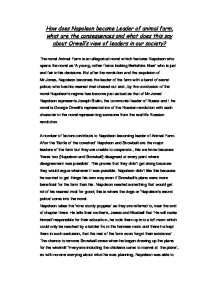 How does Napoleon become Leader of animal farm, what are the consequences and what does this say about Orwell's view of leaders in our society

How does Napoleon become Leader of animal farm, what are the consequences and what does this say about Orwell's view of leaders in our society? The novel Animal Farm is an allegorical novel which features Napoleon who opens the novel as 'A young, rather fierce looking Berkshire Boar' who is just and fair in his decisions. But after the revolution and the expulsion of Mr.Jones, Napoleon becomes the leader of the farm with a band of secret police; who has his nearest rival chased out and, by the conclusion of the novel Napoleon's regime has become just as bad as that of Mr.Jones'. Napoleon represents Joseph Stalin, the communist leader of Russia and the novel is George Orwell's representation of the Russian revolution with each character in the novel representing someone from the real life Russian revolution. A number of factors contribute to Napoleon becoming leader of Animal Farm. After the 'Battle of the cowshed' Napoleon and Snowball are the major leaders of the farm but they are unable to cooperate, this we know because 'these two (Napoleon and Snowball) disagreed at every point where disagreement was possible'. This proves that they didn't get along because they would argue whenever it was possible. ...read more.

Squealer also stated things like 'He (Napoleon) had seemed to oppose the windmill, simply as a manoeuvre to get rid of Snowball'. Squealer told the animal's things like this to try and make it look like Napoleon had made the windmill plans and that Napoleon was the innocent party. He made it look as though Napoleon was just extracting his revenge by having Snowball chased out of the farm. This was Napoleon's corruption coming to the forefront. Napoleon begins his joint leadership with Snowball as being just and fair, when, after the 'Battle of the cowshed' he awarded himself and Snowball 'Animal Hero, First Class' and the dead sheep 'Animal Hero, Second Class'. But Napoleon shows early signs of corruption when he takes the fresh milk and apples while the other animals are at the harvest with Snowball, he tells the other animals 'Forward comrades the hay is waiting....when they returned it was noticed that the milk and apples had disappeared'. By the end of the novel Napoleon's regime has become just as bad as that of Mr.Jones', for instance when Napoleon tried the animals accused of plotting secretly with Snowball the 'traitor'. Napoleon doesn't have the decency to give them a fair trial; he just has them taken round the back of the barn and the 'Nine great dogs, ripped out their throats'. ...read more.

Orwell expresses his feelings for Stalin through the way the animals feel for Napoleon. Orwell believed that in the end, the communist governments had become just as bad as that of the already corrupt state governments. Orwell firmly believed that 'All power corrupts, but absolute power corrupts absolutely', which is what he thought, happened to Stalin and what did happen to Napoleon when they both went power mad, they were minorly corrupt when not in full control but once they got a taste of power, they wanted more and when they gained full power it went to their heads and they consequently became absolutely corrupt. In Orwell's view Napoleon represents how leaders are corrupted and Mr.Jones represents the old guard governments that ruled before the communists and republicans took over. Orwell also believed that all leaders were selfish and two faced and shows this when Napoleon sells Boxer for whiskey. In Conclusion, Napoleon became leader of animal farm because he used thought and intelligence and was sly and cunning with that. This affected the farm negatively and after he became sole leader it was a downhill slope for the animals, by the end of the novel Napoleon's regime is just as bad, if not even worse than that of Mr.Jones. George Orwell was firmly against what happened in Russia, and expressed all his beliefs through the characters in this novel. Matt Turner 9J ...read more.