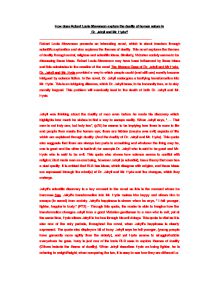 How does Robert Louis Stevenson explore the duality of human nature in Dr. Jekyll and Mr. Hyde? Robert Louis Stevenson presents an interesting novel, which is about freedom through scientific exploration and also explores the themes of duality. This novel explores the themes of duality through social, religious and scientific ideas. Similarly, Victorian society seems to be discussing these ideas. Robert Louis Stevenson may have been influenced by these ideas and this culminates in the creation of the novel The Strange Case of Dr. Jekyll and Mr Hyde. Dr. Jekyll and Mr. Hyde provided a way in which people could (and still can) aurally become intrigued by science fiction. In the novel, Dr. Jekyll undergoes a terrifying transformation into Mr. Hyde. This is an intriguing dilemma, which Dr. Jekyll faces; to be immorally free, or to stay morally trapped. This problem will eventually lead to the death of both Dr. Jekyll and Mr. Hyde. Jekyll was thinking about the duality of man even before he made his discovery, which highlights how much he wishes to find a way to escape reality. When Jekyll says, ".... That man is not truly one, but truly two", (p70) he seems to be implying how there is more to life and people than meets the human eye; there are hidden (maybe even evil) aspects of life which are explained through duality. (And the duality of Dr. Jekyll and Mr. Hyde). This quote also suggests that there are always two parts to something and whatever the thing may be, one is good and the other is bad/evil; for example Dr. ...read more.

may have been influenced by Darwin's ideas; Dr. Jekyll explores with science, as does Darwin and both scientists make extraordinary discoveries. When Lanyon calls Jekyll's scientific experiments "Scientific balderdash", he is talking about how much he feels that Jekyll's scientific results are unreliable and maybe even a complete waste of time. However, Jekyll believes his ideas are completely viable. Charles Darwin also believed his theory of evolution was realistic, in spite of this, the scientific community failed to agree. Duality is explored through science in this novel through the outcomes of scientific discovery; some outcomes may be positive (good), others will be a negative result (bad). RLS cleverly capitalises on science (which is like the back drop of the novel) to create an effect, which allows corroboration between Darwin and Jekyll's ideas. This similarity between Jekyll and Darwin shows how RLS may have been influenced by the ideas of Darwin and the speculation surrounding his ideas. RLS uses descriptive language, of various places to subtly compare these settings to Jekyll and Hyde. This is evident when Stevenson describes Jekyll's house by saying, "A square on ancient, handsome houses . . . One house . . . now plunged in darkness" (p23). The first part of the quote subtly highlights the fact that Jekyll is not the villain in the novel, in other words he is more or less a perfect Victorian gentleman; perfect Victorian gentlemen are described as handsome and in the same way, RLS describes the houses as handsome, linking the idea of a perfect Victorian gentleman to Dr. ...read more.

of the novel to generate such intense scrutiny. Mr. Utterson narrates the novel at first; the reader is reading his point of view. The reader is able to see events as they unfold from a man who takes it upon himself to investigate the strange goings-on concerning Dr. Jekyll and Mr. Hyde. The last two chapters of the novel are not only alternative endings, but are also written from the point of view of two other people: Dr. Lanyon and Dr. Jekyll. Dr. Lanyon's narrative describes a less detailed version of the truth surrounding Dr. Jekyll and Mr. Hyde, although it does give a good indication of how he died. The second "ending" (from Jekyll's point of view), shows the reader the real motive behind Jekyll's transformations and the events leading up to his death; it gives much more detail. Dr. Jekyll's point of view highlights how happy and younger he felt after taking the potion; this tells the reader how even though Jekyll changes into a "bad" character, he seems to be very content. Stevenson uses these two endings, again, to give hints to the reader about the dual quality (ies) of Dr. Jekyll and Mr. Hyde. In conclusion, it is evidently shown that Robert Louis Stevenson uses many aspects of the novel (The Strange Case of Dr. Jekyll and Mr. Hyde) to discuss the themes of duality. He also uses themes from other places (such as Darwin's ideas), to aid him to portray the duality of Dr. Jekyll and Mr Hyde. It is these two parts, used together, which culminate in the success of this novel and its ability to describe duality well. ?? ?? ?? ?? ...read more.