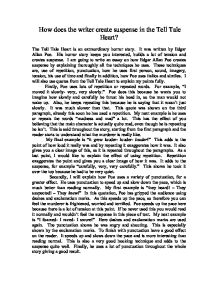 How does the writer create suspense in the Tell Tale Heart?

How does the writer create suspense in the Tell Tale Heart? The Tell Tale Heart is an extraordinary horror story. It was written by Edgar Allan Poe. His horror story keeps you interested, builds a lot of tension and creates suspense. I am going to write an essay on how Edgar Allan Poe creates suspense by explaining thoroughly all the techniques he uses. These techniques are, use of repetition, punctuation, how he uses first person, sound, imagery, tension, his use of time and finally in addition, how Poe uses italics and similes. I will also use quotes from the Tell Tale Heart to explain my points fully. Firstly, Poe uses lots of repetition or repeated words. For example, "I moved it slowly- very, very slowly." Poe does this because he wants you to imagine how slowly and carefully he thrust his head in, so the man would not wake up. Also, he keeps repeating this because he is saying that it wasn't just slowly. It was much slower than that. This quote was shown on the third paragraph, already this soon he has used a repetition. My next example is he uses or repeats the words "madness and mad" a lot. This has the effect of you believing that the main character is actually quite mad, even though he is repeating he isn't. ...read more.

This phrase reminds you of old scary horror films and makes you wonder, who is behind the door? It is also a creepy noise that relates to old abandoned houses. My second example is "It was the low stifled sound." This quotation shows that in some ways he is paranoid as he is hearing things. It gets the reader more into suspense, as he believes the murderer is not alone and something is going to happen within this. Also, the sound gives you an idea of how it sounded. An additional example is "the old man sprang up in the bed, crying out- whose there?" In this example there is a lot of tension, you can almost hear the old voice of the man. A last quotation is "I fairly chuckled at the idea." This shows that you can imagine the murderer laughing in an evil way; also he is amused that the man has no idea about what is going to happen. As a final point, sound gives the idea of how something sounded - so maybe quietly. It gives an idea of the surroundings and creates atmosphere. Poe has used this at the right moments in the story when he is describing something. A further reason Poe creates suspense is the use of descriptive words (imagery). ...read more.

This quotation gives you a clear image of how dark it was, as it is being referred to a pitch. Another example is "a low dull quick sound, such as a watch makes when enveloped in cotton." This gives you another image of what the sound was like being referred to something else. As a final point, Poe uses italics and similes because they stress the point clearly. In conclusion, Poe uses a variety of techniques to create suspense in the Tale Tell Heart. These are - use of repetition, punctuation, how he uses first person, sound, imagery, tension, his use of time and italics and similes. These techniques create a good effect on the reader and are mostly successful hooking techniques. Poe keeps you reading the story by making you want to know what happens next using these skilful ways, without those ways The Tell Tale heart wouldn't be as good. I think that the use of tension is most effective because it covers just about all the areas and it makes the story more exciting and interesting to read. The part of story I think is the best, is where all the tension increases when he is going to murder the man. This is because at that point you don't want to put it down, as there is a lot of suspense. Overall, I would rate The Tale Tell Heart a very good horror story, with impressive techniques used throughout. By Jaysen Sutton 8B ...read more.