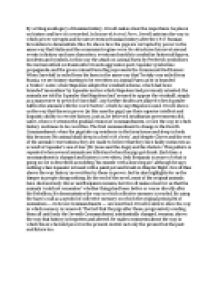 In his novel Animal Farm, Orwell satirises the way in which power corrupts and he uses events in Russian history after the 1917 Russian Revolution to demonstrate this.

﻿By writing an allegory of Russian history, Orwell makes clear the importance he places on history and how it is recorded. In his novel Animal Farm, Orwell satirises the way in which power corrupts and he uses events in Russian history after the 1917 Russian Revolution to demonstrate this. He shows how the pigs are corrupted by power in the same way that Stalin and the communist regime were. He structures his novel around events in history and uses characters, events and motifs to symbolise historical figures, incidents and symbols. In this way the attack on Animal Farm by Frederick symbolises the German attack on Russia after its anti-aggression pact; Squealer symbolises propaganda; and the green Animal Farm flag represents the Communist Red Banner. ...read more.

Orwell shows us the way that those in power (in this case the pigs) use their superior intellect and linguistic ability to rewrite history, just as, he believed, totalitarian governments did. Later, when we witness the gradual erosion of commandments, we see the way in which history continues to be rewritten. The first commandment to change is the Fourth Commandment; when the pigs take up residence in the farm house and sleep in beds, this becomes ?No animal shall sleep in a bed with sheets?, and despite Clover and the rest of the animals? reservations, they are made to believe that they have faulty memories as a result of Squealer?s use of fear (Mr Jones and the dogs) ...read more.

By the end of the novel, most of the original animals have died and only Clover and Benjamin remain, but Orwell makes clear for us that the animals ?could not remember? whether things had been better or worse directly after the Rebellion. He demonstrates the way in which collective memory is eroded. By using the barn?s wall as a symbol of collective memory on which the original principles of Animalism ? its Seven Commandments ? are inscribed, Orwell is able to show the way in which memory is removed. The fact that the pigs alter these, progressively eroding them all until only the Seventh Commandment, substantially changed, remains, shows the way that history is forgotten and altered. He makes comments about the way in which those who hold power in the present control not only the present but the past and future too. ...read more.