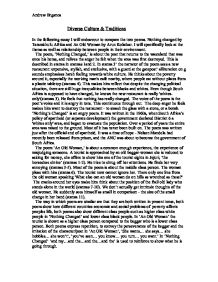 In the following essay I will endeavour to compare the two poems. Nothing changed by Tatamkhulu Afrika and An Old Woman by Arun Kolatkar. I will specifically look at the theme as well as relationship between people in their environment.

Diverse Culture & Traditions In the following essay I will endeavour to compare the two poems. Nothing changed by Tatamkhulu Afrika and An Old Woman by Arun Kolatkar. I will specifically look at the theme as well as relationship between people in their environment. The poem, 'Nothing Changed,' is about the poet that returns to the wasteland that was once his home, and relives the anger he felt when the area was first destroyed. This is described in stanza in stanzas 1and 2. In stanza 3' the narrator of the poem sees a new restaurant: expensive, stylish, and exclusive, with a guard at the gatepost' alliteration on g sounds emphasises harsh feeling towards white culture. He thinks about the poverty around it, especially the working man's caf� nearby, where people eat without plates from a plastic tabletop (stanzas 4). This makes him reflect that despite the changing political situation, there are still huge inequalities between blacks and whites. Even though South Africa is supposed to have changed, he knows the new restaurant is really 'whites-only'(stanzas 3). He feels that nothing has really changed. The voice of the poem is the poet's voice and it is angry in tone. ...read more.

In 'An Old Woman' the tourist is shown as a higher class person compared to the beggar who is a lower class person. Both poems express repetition, to convey the perseverance of the beggar and the irritation of the character/poet in 'An Old Woman', 'She wants... she says... she hobbles... she won't', 'you've seen... you know... you turn... you want.' In 'Nothing Changed' 'and my...and the...and the...and the' is used to reinforce to show what he is going through. The subject of the theme of 'Nothing Changed' is about the radical segregation and wealth of whites and poverty of the blacks. The poem is a powerful protest against poverty injustice and racism. The environment is big part of people's lives; this is similar to the theme of 'An Old Woman' the old woman is a beggar who is also in a poor environment, where she has not much opportunities, because of the poverty around her. The way in which both poems are similar in 'Nothing Changed' and 'An Old Woman' both poems what to see a change in the environment and they way people judge each other. ...read more.

Because they are so short, they are very direct and powerful. Also the poem's language splits into two halves: The bored, ordinary language of the first half and the elaborate metaphorical figurative language of the second, the metaphors 'bullet holes' shows that the tourist could see straight through the old woman eyes. The poet also used 'shatter-proof crone' this is a powerful metaphor makes the woman seem powerful and strong, despite her beggary. The poem finishes with a metaphor what has happened to make the tourist feel like 'small change' in the hand of the beggar. The tourist feels his guard has dropped, he feels as pathetic and worthless as the small change. The tone of the poem sympathetically the tourist becomes concerned for the woman and makes the reader feel sympathy for the old woman. The two poems 'Nothing Changed' and 'An Old Woman' are engaging it makes the reader think about the environment that surround them, its make the reader feel fortunate that they are not in that same situation, where there is a hierarchy social order and rank. The two poems show the anger towards injustice and unfairness in society, and describe deeply the people in harsh environment facing hardship. I feel both poems feel that they reaching out for help. Andrew Brganca ...read more.