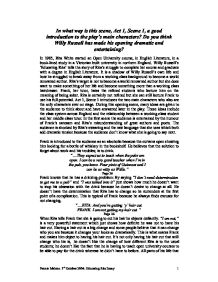 In what way is this scene, Act 1, Scene 1, a good introduction to the play's main characters? Do you think w***y Russell has made his opening dramatic and entertaining? In 1985, Rita White started an Open University

In what way is this scene, Act 1, Scene 1, a good introduction to the play's main characters? Do you think w***y Russell has made his opening dramatic and entertaining? In 1985, Rita White started an Open University course, in English Literature, in a book-lined study in a Victorian built university in northern England. w***y Russell's 'Educating Rita' tells the story of Rita's struggle to complete her course and graduate with a degree in English Literature. It is a shadow of w***y Russell's own life and how he struggled to break away from a working class background to become a world renowned author. Rita's target is not to become a world renowned author but she does want to make something of her life and become something more than a working class hairdresser. Frank, her tutor, hates the refined students who lecture him on the meaning of being sober. Rita is certainly not refined but she can still lecture Frank to use his full potential. Act 1, Scene 1 introduces the two main characters who also are the only characters ever on stage. During this opening scene, many ideas are given to the audience to think about and have answered later in the play. These ideas include the class system across England and the relationship between a working class student and her middle class tutor. In the first scene the audience is entertained by the humour of Frank's sarcasm and Rita's misunderstanding of great authors and poets. The audience is shocked by Rita's swearing and the raw language that she uses which both add dramatic tension because the audience don't know what she is going to say next. ...read more.

She is sacrificing a lot to change, her job and her relationship with her family and husband Denny. She is lying to Denny saying that she is still on the pill because she knows that before she has a family she wants to have more of a life and to have achieved something in it. "See, I don't wanna baby yet. See, I wanna discover meself first." Page 24 Rita wants to change so much that she is willing to deceive her husband so she has a chance to do so. Because she is lying the audience may think that soon Denny might find out that she is lying to him and might become full of rage. Later on in the play these suspicions are brought to light as Denny burns Rita's books. Rita, although not educated, is still very intelligent. This is shown first when Rita starts to talk about the picture in Franks office. She uses very formal and mature words such as "erotic" when she describes the picture. The audience are given an impression of Rita from her entrance and first comments to Frank that she is not very intelligent because of her Liverpudlian accent and her misunderstanding of Franks question, "You are?" Another example of Rita's intelligence is how she tests Frank by swearing to see what sort of a response she will get from that. Testing someone shows intelligence because it takes intelligence to time it correct and to accurately determine what is appropriate to test that person with. Rita, when talking, moves around the room picking up books and leaning on the desk and chairs. This shows more about her character because she is very lively and she doesn't want to be still and calm and she needs an outlet for her energy that resides within her. ...read more.

This first scene leads the audience into believing that these two people will be getting together. Because of this, the audience is intrigued into finding out if this relationship is going to blossom and what is going to become of it. This means that because the audience is asking question to themselves about what is going to happen, they must be involved and to be involved they must be being entertained. w***y Russell's attempt to make the opening scene a good introduction to the main characters was very successful as the audience is knowledgeable of their past, their present and are told about what their future goals are and are given clues into what might happen in the rest of the play. Because the audience is well informed of these factors it means that Russell's target to entertain the audience. The relationship between these two characters and other relationships outside of it are also introduced well to the audience. The audience is given the chance in the scene to predict what will happen between the two characters: whether they will keep the strict teacher/ student relationship; become friends who are there for each other when they are needed and give support and advice; or whether they will get together as a couple. Russell also does well with entertaining the audience. His main technique to do this is humour which is added frequently and in turn certifies that the audience will be entertained. To conclude the whole scene shows how w***y Russell has intentionally placed every word so that the scene is an excellent introduction to the main characters and their relationship between each other; and how he made this scene dramatic and entertaining. Educating Rita written by w***y Russell, published by New Longman Literature - 2000 1 Pennie Malone. 3rd October 2004. Educating Rita Essay ...read more.