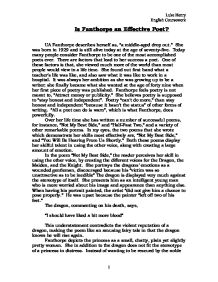 Is Fanthorpe an Effective Poet?

Is Fanthorpe an Effective Poet? UA Fanthorpe describes herself as, "a middle-aged drop out." She was born in 1929 and is still alive today at the age of seventy-five. Today many people consider Fanthorpe to be one of the most accomplished poets ever. There are factors that lead to her success a poet. One of these factors is that, she viewed much more of the world than most people would view in a life time. She found out first hand what a teacher's life was like, and also saw what it was like to work in a hospital. It was always her ambition as she was growing up to be a writer; she finally became what she wanted at the age of forty nine when her first piece of poetry was published. Fanthorpe feels poetry is not meant to, "Attract money or publicity." She believes poetry is supposed to "stay honest and independent". Poetry "can't do more," than stay honest and independent "because it hasn't the status" of other forms of writing. ...read more.

Instead of wanting to be rescued by the noble knight, "to be honest, I didn't much fancy him." "I quite took to the dragon." St. George, who is known in other poems as a heroic knight who rescues the princess and carries her away to marry her, living happily ever after, is revealed as being "ostentatiously beardless", and the princess worries that he may "have acne, or blackheads, or bad breath". He thinks very highly of his armour, his horse, and himself. The author destroys the stereotype view of all the characters in the tale of St. George slaying the dragon. Instead of being the noble knight, he appears as a male chauvinist, whilst the princess, instead of being helpless, is an opinionated girl who speaks her own mind. Fanthorpe also frequently creates humour in the poem, for example when the princess says, "that green sexy tail" "You Will Be Hearing From Us Shortly," is another show of why she is such a successful poet today. ...read more.

They interviewer had just said something about looks being a delicate matter when he brings it up just in more detail, "You do appreciate this work involves contact with the actual public." This shows that the interviewer not keen on the appearance of the person that is being interviewed. The point Fanthorpe makes very well is that the proud, pompous interviewer prejudges the man seeking employment. He criticizes his looks, accent, background, age, and number of children; not giving him a fair interview based on his qualifications. There are no major weak points in the style of Fanthorpe's poetry. Not only does she display her use of the other voice, but she also creates humour and makes her views on society today known. This is also shown in "Dear Mr Lee", in which the student loves reading, but fails exams, because she disagrees with the exam board, and cannot meet their expectations. Fanthorpe creates ample amounts of emotion and feeling in all her poems as we covered briefly. Her poems are written in an irregular form, with no rhyme scheme, yet her exceptional use of words makes her poetry very interesting. Luke Henry English Coursework 1 ...read more.