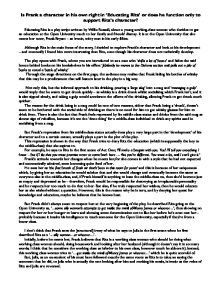 Is Frank a character in his own right in 'Educating Rita' or does he function only to support Rita's character?

Is Frank a character in his own right in 'Educating Rita' or does he function only to support Rita's character? Educating Rita is a play script written by Willie Russell, about a young working-class woman who decides to get an education at the Open University much to her family and friends' dismay. It is at the Open University that she meets her tutor, Frank Bryant - an ironic, witty man in his early fifties. Although Rita is the main focus of the story, I decided to explore Frank's character and look at his development - and eventually I found him more interesting than Rita, even though his character does not technically develop. The play opens with Frank, whom you are introduced to as a man who 'shifts a lot of booze' and hides the said booze behind books on his bookshelves in his office: 'Jubilantly he moves to the Dickens section and pulls out a pile of books to reveal a bottle of whisky.' Through the stage directions on the first page, the audience may realise that Frank hiding his bottles of whisky that this may be a predicament that will feature later in the play in a big way. Not only this, but the informal approach to his drinking, pouring a 'large slug' into a mug and 'managing a gulp' would imply that he wants to get drunk quickly - as whisky is a drink drunk whilst socialising which Frank isn't, and it is also sipped slowly, and taking a gulp would accelerate the effects of the drinking, allowing Frank to get drunk much quicker. The reason for the drink being in a mug could be one of two reasons, either that Frank being a 'drunk', doesn't seem to be bothered with the social side of drinking so there is no need for him to get whisky glasses for him to drink from. ...read more.

The test he gave her (without letting her know that he was testing her) was to read some of his poetry. This is the poetry which he believes is just something that he wrote when he was younger, when he believed that his poetry actually meant something. However, when he got older, and re-read his poetry, he realised that it was not as 'profound and witty' as he thought and Rita, when tried, made it out to be. After she read it, she described the poetry as; 'This is brilliant. They're witty. They're profound. Full of style.' She says that she spent the whole night talking with her flatmate, Trish, about Frank's poetry and they came to the conclusion that they were, 'More resonant than - purely contemporary poetry in that you can see it in a direct line to nineteenth-century traditions of wit an' classical allusion.' At this, Frank does not seem impressed at all and he realises that Rita's personality has been distorted by her education than what he thought imaginable. Frank finally gives in to his belief that Rita would turn out like this. He, at last decided that he started the change of events that changed Rita from a unique and interesting [working-class] person to another of the educated, middle-class generics whom his is so familiar with. Rita being from the working class made her who she was. To Frank, this made her cynical and almost disrespectful with a yearning for something better, and this was the person who he became so fond of. But, it was her desire for something different that had eventually turned him away. He tells her that she should called him Mary Shelley from then on; like she had called herself Rita (After Rita Mae Brown - an author she admired), explaining his analogy. Mary Shelly created Dr. Frankenstein, who created Frankenstein's Monster. This monster was an accident in how it turned out but purely deliberate in its building. ...read more.

I was right, because it destroyed him. Frank lost his job, (in the film he lost Julia and his best friend), he had already lost his wife long before the play and then finally, he lost Rita. We can see his life paralleled in the dialogue about the difference between a tragic event and a tragedy: '...It's that flaw which forces him to take the inevitable steps towards his own doom ... You see he goes blindly on and on and with every step he's spinning one more piece of thread which will eventually make up the network of his own tragedy.' The audience has a feeling by this point, that although he's talking about Macbeth's tragedy and the tragic event of a man dying because a tree fell on him, the audience knows that under that - Frank could be talking about his own life; a series of tragic events which set him into beginning his own inevitable path to his doom. This is caused by, of course, his alcohol problem (and possibly his other personal problems of his insecurities, etc.). But, in spite of Frank being portrayed as plausibly bland in the film, Frank did show some emotion in parts of the film (especially at the end when the audience saw his eyes well up with tears when he and Rita parted) and, although this could just be to show what an amazing effect Rita had had on him, I think it was because the character had felt like her had genuinely lost something - possibly the final thing that he could have lost. Just after the two characters had argued in Act Two, Scene Five; he had lost her, if only temporarily. This was one of the final tragic events which lead up to his downfall - being fired and going off to Australia. Frank wouldn't have been given a tragedy plot if he was merely a supporting role to enhance the character of Rita. Russell probably wrote this in as a less obvious plot which suits Frank's character perfectly, as Frank himself is not a particularly extroverted character. ...read more.