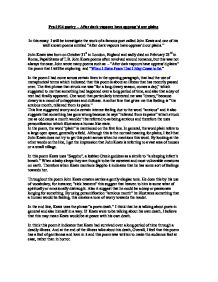 Pre-1914 poetry - After dark vapours have oppress'd our plains In this essay I will be investigate the work of a famous poet called John Keats and one of his well known poems entitled "After dark vapours have oppress'd our plains." John Keats was born on October 31st in London, England and sadly died on February 23rd in Rome, Papal States of T.B. John Keats poems often revolved around romance, but this was not always the case. John wrote many poems such as - "After dark vapours have oppress'd plains" the poem that I will be exploring and "When I Have Fears That I May Cease to be." In the poem I had come across certain lines in the opening paragraph, that had the use of metaphorical terms which indicated that this poem is about an illness that has recently passed over. ...read more.

This line suggested worry and a certain intense feeling due to the word "anxious" and it also suggests that something has gone wrong because he says "relieved from its pains" which struck me as odd cause a month wouldn't be referred to as being anxious and therefore the uses personification which illustrates a human like state. In the poem, the word "plain" is mentioned on the first line. In general, the word plain refers to a large open space, generally a field. Although this is the normal meaning for plains, I feel that John Keats does not try to get this point across when he mentions this word. By looking at the other words on the line, I get the impression that John Keats is referring to a vast area of houses or a small village. ...read more.

By using personification "anxious month" he illustrates something that a human would be feeling, this creates a tone of worry towards the reader. In the end line, Keats uses the phrase "a poets death." I think that he is talking about poets in general and also himself in a way. If Keats were to be talking about his own death, I believe that this may mean Keats would be at peace with his own death. In think this poem it indicates that Keats had survived over a long period of time through a deadly illness. And at the end of the illness talks about his death, Overall, I feel that this poem has a feel of gentleness and love in it and this poem was written to make the audience feel at ease, rather than in horror. ...read more.