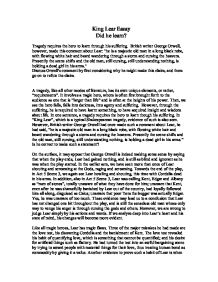 King Lear - Did he learn?

King Lear Essay Did he learn? Tragedy requires the hero to learn through his suffering. British writer George Orwell, however, made this comment about Lear: "he is a majestic old man in a long black robe, with flowing white hair and beard wandering through a storm and cursing the heavens. Presently the scene shifts and the old man, still cursing, still understanding nothing, is holding a dead girl in his arms." Discuss Orwell's comment by first considering why he might make this claim, and them go on to refute the claim. A tragedy, like all other modes of literature, has its own unique elements, or rather, "requirements". It involves a tragic hero, whom is often first brought forth to the audience as one that is "larger than life" and is often at the heights of his power. Then, we see the hero falls, falls into darkness, into agony and suffering. However, through the suffering, he is required to have learnt something, to have acquired insight and wisdom about life. In one sentence, a tragedy requires the hero to learn though his suffering. In "King Lear", which is a typical Shakespearean tragedy, evidence of such is also seen. ...read more.

He had asked the fool if he was cold and had said to Kent and the fool, "poor fool and knave, I had one part in my heart that's sorry yet for thee." This is the first time in the play that we see Lear concerned for someone else. Previously, he was always caught up and preoccupied with his own sufferings and showed little attention to the others. Such a change is further developed after Kent had led Lear and the fool to a little shelter and Lear began to comment about human suffering. He had showed concern and sympathy for the fate of the "poor naked wretches" and worried about how they were going to endure the storm when they were starving and had no clothes. He then began to blame himself and felt guilty that he had "ta'en too little care of this" when he was the king. He had even went to the extent to say, "Take physic, Pomp; expose thyself to feel what wretches feel, that thou mayst shake the superflux to them, and show the heavens more just". By this, he meant that it is only just if the rich people of the country share their wealth with the ...read more.

After the battle between Britain and France and Lear and Cordelia were taken as captives by Edmund, we see Lear being wise when he said, " so we'll live, and pray, and sing, and tell old tales...". Here, we see that Lear, after experiencing all the corruption and betrayal, was still able to show optimism and an innocence so pure, to see love and hope and all the goodness in life. At this point of the play, we see that Lear's vision of life was completely changed, he was no longer caring only about material things, but the love that existed between him and Cordelia. The play ended with both Lear and Cordelia dead. However, Lear had died as a wise men who had gained much insight into humanity and had found worth in life. Thus we see that the essence of a tragedy is indeed a hero falling from the highest point in his life and embarks on a journey into darkness and suffering. At the end of the journey, he will truly have learnt and gained awareness. Similarly, as Lear gets more and more mad, he gets closer and closer to truth and humanity. Last but not least, Lear had indeed learnt from his suffering. Name: Sun, Xing Due Date: 5th Jan 2004 ...read more.