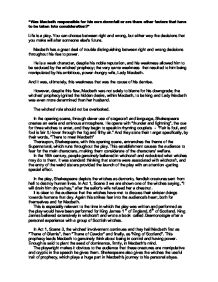 "Was Macbeth responsible for his own downfall or are there other factors that have to be taken into consideration?" Life is a play. You can choose between right and wrong, but either way the decisions that you make will alter someone else's future. Macbeth has a great deal of trouble distinguishing between right and wrong decisions throughout his rise to power. He is a weak character, despite his noble reputation, and his weakness allowed him to be seduced by the witches' prophecy; the very same weakness that resulted to him being manipulated by his ambitious, power-hungry wife, Lady Macbeth. And it was, ultimately, this weakness that was the cause of his demise. However, despite this flaw, Macbeth was not solely to blame for his downgrade; the witches' prophecy ignited the hidden desire, within Macbeth, to be king and Lady Macbeth was even more determined than her husband. The witches' role should not be overlooked. In the opening scene, through clever use of stagecraft and language, Shakespeare creates an eerie and ominous atmosphere. He opens with "thunder and lightning", the cue for three witches to enter, and they begin to speak in rhyming couplets - "Fair is foul, and foul is fair \\ Hover through the fog and filthy air." And they state their target specifically, by their words, "There to meet Macbeth" Thereupon, Shakespeare, with this opening scene, entrenches the theme of the Supernatural, which runs throughout the play. This establishment causes the audience to fear for the main characters, making them considerate of the characters' welfare. ...read more.

With his wife, Macbeth's weakness is his love for her; it blinds him into concurring to whatever deed her twisted mind decides. Shakespeare shows Lady Macbeth as a vindictive, scheming character - yet not in the same light as the witches. Their motive is evil; hers is power. In Act 1, Scene 6, Lady Macbeth puts her tactics into motion and begins to finagle Macbeth. We are shown her belittling Macbeth and impugning his sense of courage, ambition and his love for her; this having a colossal effect on Macbeth. In her words, "Wouldst thou have that \\ Which thou esteem'st the ornament of life, \\ And live a coward in thine own esteem," we see clearly that she is a ruthless, manoeuvring woman, driven by the ethereal idea of being Queen, who will not let anyone come between her and her crown. Although Macbeth is portrayed as a brave, heroic figure, he quickly falls seduced into his wife's guileful plan. Throughout the play, the playwright illustrates Lady Macbeth as a conniving, ruthless character, who is the devil-on-the-shoulder of Macbeth, whispering catastrophic ideas into his ear. She is also the sly creature that frames Duncan's guards, first drugging them, and then plunging their daggers into the already dead king. When Macbeth refuses to go back into the room and leave the daggers, she replies, "If he do bleed, \\ I'll gild the faces of the grooms withal, \\ For it must seem their guilt." ...read more.

In Act 3, Scene 3 Banquo - Macbeth's closest friend - is killed, by order of Macbeth after his suspicious mind works overtime and he cannot bear the thought of Banquo's son being king in the future. Although he puts on a fa�ade of remorse in front of others for his friends murder, Macbeth's real torment is that caused by Banquo's ghost. "Thou canst not say I did it. Never shake \\ Thy gory locks at me." The audience can see clearly that Macbeth feels sorrow only for himself; pity at the situation he is in. He does not, like many others I should think, want to see the ghost of his dead friend and so feels sorry for himself for having been possessed with this attribute. It is evident that Macbeth is selfish and narcissistic who feels no guilt for the murder of his friend but self-pity for the torment bestowed upon him by Banquo's ghost. In the end, Macbeth was selfish, jealous, ambitious and malignant - all signs of wickedness. He killed an honourable father figure for the sake of a piece of head jewellery and the mere title of 'King' - which if he had waited he would have rightfully deserved. It was his own doings, not that of of the witches or his wife, that lead him to destruction and death. He was never forced by anyone to do anything. However much Macbeth was influenced or manipulated it was always him with the ultimatum of right or wrong and unfortunately for him, the word right did not exist in his dictionary. ...read more.