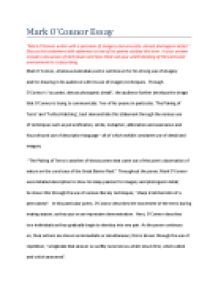 Mark O'Connor, a famous Australian poet is well known for his strong use of imagery and for drawing in his audience with his use of imagery techniques.

﻿Mark O?Connor Essay ________________ ?Mark O?Connor writes with a precision of imagery and accurate, almost photogenic detail.? Discuss this statement with reference to two of his poems studied this term. In your answer include a discussion of techniques and how these aid your understanding of the particular environment he is describing. Mark O?Connor, a famous Australian poet is well known for his strong use of imagery and for drawing in his audience with his use of imagery techniques. Through O?Connor?s ?accurate, almost photogenic detail?, the audience further develops the image that O'Conner is trying to communicate. Two of his poems in particular, ?The Pairing of Terns? and ?Turtles Hatching?, best demonstrate this statement through the various use of techniques such as personification, simile, metaphor, alliteration and assonance and his profound use of descriptive language - all of which exhibit consistent use of detail and imagery. ?The Pairing of Terns is another of those poems that came out of the poet's observation of nature on the coral cays of the Great Barrier Reef.? Throughout the poem, Mark O?Connor uses detailed description to show his deep passion for imagery and photogenic detail, he shows this through the use of various literary techniques, ?sharp stretched skin of a pterodactyl?. ...read more.

There are also many metaphors of love throughout the poem, ?riding the weird and unguessable surf of the air?, ?locked in pairs by invisible steel?, ?their love is everything for which we have only metaphors?. Also, through the use of a paradox, ?wild oceans of distance, and feathertip closeness?, the strong loves of the terns are shown. This text works as a love poem as the author has used the paradox of ?distance? and ?closeness? to express the unconditional love of the terns. The paradox is saying that it doesn?t matter how far away the terns are from each other, their love will always stay strong. They will embrace the fact that they are ?oceans? away from each other and through their love, they will feel as close as they will ever be. The use of the techniques simile, metaphor and paradox emphasize O?Connor?s strong use of vivid imagery to make the reader feel as if they are actually there experiencing the love of the terns with their own eyes. Another Mark O?Connor poem is ?Turtle's Hatching?, this poem contemplates the mystery of birth and death through the close observation of turtles hatching. ...read more.

O?Connor also created stress on words at the beginning of the lines, such as 'last, will be picked', this creates a tone of determination and established the chance of survival. In the fourth stanza, the poets uses hyperboles like "castles and every hole an abyss" to create a vivid imagery emphasising the danger of the turtles situation. "Scrambling, sand, scrabbling, slime, sculling and sand pools" are all examples of alliteration, and adds onto the growing environment that O'Connor is attempting to convey to the readers. The simile, "as a dry handshake" is used to help create a description of a turtle, depicting the impression of a childish pleasure. Throughout the entire poem, O'Connor uses heavy description and literary terms which develops the environment he is describing, creating the clear image in the audience's mind. His choice of words, though is effective and corresponds with the scenery of the poem. This statement can also be referred in the previous poem, ?The Pairing of Terns?. Therefore, I believe that O?Connor writes with a precision of imagery and accurate, almost photogenic detail. I have shown this through the two chosen poems: the Pairing of Terns and Turtles Hatching. Mark O?Connor?s strength in ability to create vivid imagery and realism is shown throughout the two poems in order to entertain his readers. ...read more.