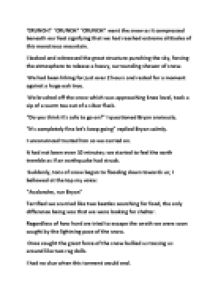 ﻿?CRUNCH!? ?CRUNCH!? ?CRUNCH!? went the snow as it compressed beneath our feet signifying that we had reached extreme altitudes of this monstrous mountain. I looked and witnessed the great structure punching the sky, forcing the atmosphere to release a heavy, surrounding shower of snow. We had been hiking for just over 2 hours and rested for a moment against a huge oak tree. We brushed off the snow which was approaching knee level, took a sip of a warm tea out of a silver flask. ?Do you think it?s safe to go on?? I questioned Bryan anxiously. ?It?s completely fine let?s keep going? replied Bryan calmly. ...read more.

Once caught the great force of the snow bullied us tossing us around like two rag dolls. I had no clue when this torment would end. Then out of nowhere it came to sudden painful stop. I wearily opened my eyes to see the great oak which had put an end to the torture. I felt as if I had run into a brick wall. I had no idea where Bryan was. At this point realisation struck. I started to panic, I screamed in desperation ?BRYAN!? praying for a reply. ?Down here? after a short pause responded a beaten voice. ...read more.

I grabbed my rucksack gave him some pain killer with what was left of our green tea. I quickly realised that it was simply not possible for us to return to safety on our own terms. I rummaged around the rucksack searching for my phone. I quickly dialled the emergency number hoping that I would be able to connect. Luckily I was I explained the situation. I looked at Bryan and said ?Help is on its way.? looked up to the heavens in relief. I took a deep breath and went and sat down underneath the tree that looked over us. I recalled Bryan telling me it was completely safe to hike here. I peered around the great oak and viewed the path of destruction left by the monster. How he was wrong. ...read more.