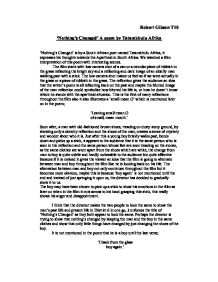 Robert Gibson T10 'Nothing's Changed' A poem by Tatamkhulu Afrika 'Nothing's Changed' is by a South African poet named Tatamkhulu Afrika, it expresses his thoughts towards the Apartheid in South Africa. We watched a film interpretation of this poem with interesting scenes. The film starts with low camera shot of a can or a circular piece of rubbish in the grass reflecting the bright sky and a reflecting and dark image of an elderly man walking past with a stick. The low camera shot makes us feel as if we were actually in the grass or a piece of rubbish in the grass. The reflection gives the audience an idea that the writer's poem is all reflecting back on the past and maybe the blurred image of the man reflection could symbolise how blurred his life is, or how he doesn't know where he stands with the apartheid situation. This is the first of many reflections throughout the film also it also illustrates a 'small mean O' which is mentioned later on in the poem; 'Leaving small mean O of small, mean mouth.' Soon after, a man with old-fashioned brown shoes, treading on dusty stony ground, by showing only a sketchy reflection and the shoes of the man, creates a sense of mystery and wonder about who it is. Just after this a young boy briskly walks past, bends down and picks up a stick, it appears to the audience that it is the same person who is seen in the reflection and the same person whose ...read more.

The Inn is shown to be a bright pleasant place amongst the grass, as it is made to sound like a very pleasant place in the poem; 'Brash with glass name flaring like a flag, it squats in the grass and weeds, incipient Port Jackson trees: new up-market, haute cuisine, guard at the gatepost whites only inn.' As the this verse is said a medium shot through a window, of a white man eating at the inn is shown, and simultaneously the reflection of the black man is shown, creating some kind of image for the audience of a barrier between whites and blacks, not only does it show this but it also show the look on his face as he is looking through the window. There are many things in this film that re small and seem very insignificant and this is one of them; when one of the waiters inside the inn wipes his fingers on the back of a chair, he then rubs his fingers and his thumb together as if to signal 'we've got money' or 'this is expensive.' There is a guard standing outside the gatepost of the Inn, he stands with confidence and authority with quite plain features, a conclusion that it is a whites only inn can be drawn as there is a guard first of all and he is a white guard. An extreme close-up shot of the guard's sunglasses is shown giving another reflection looking out on the open land of District 6, with the elderly man standing far ...read more.

The film ends with a flash of fire wiping across the screen, representing the boys anger and then 'Nothing's Changed' is said, this is quite powerful as instead of actually showing the boy break the glass with rage, fire is just used to show how he feels. The music throughout the film is a loop of tribal style music, maybe suggesting of going back to a wasteland of a desert land, which has been left. The tribal style music consisted of drums and a flute sounding instrument giving the atmosphere of the area being dry and hot, along with the colours used, it is also played on a loop so this could be representing the fact that 'Nothing's changed.' Throughout the film there is a nondiegetic voiceover of the author of 'Nothing's Changed,' Tatamkhulu Afrika, reading his poem, this has a tremendous effect on the audience as it shows that he means what he is saying so much that it requires his own voice to get the message across. The deepness of his voice also adds to how powerful his reading is, as it seems like he is demanding or angry. He speaks at a steady pace, this gives the audience time to interpret what he is saying and it gives a sense of seriousness to the poem. A thing that really made the film effective is the fact that it was read by the author with his South African accent, it shows that he knows what he is talking about as he was brought up there. ...read more.