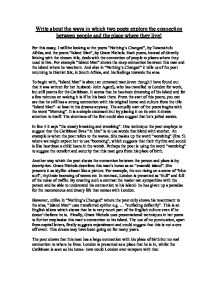 &quot;Nothing's Changed&quot;, by Tatamkhulu Afrika, and the poem &quot;Island Man&quot;, by Grace Nichols. Each poem, instead of directly linking with the chosen title,

Write about the ways in which two poets explore the connection between people and the place where they live! For this essay, I will be looking at the poem "Nothing's Changed", by Tatamkhulu Afrika, and the poem "Island Man", by Grace Nichols. Each poem, instead of directly linking with the chosen title, deals with the connection of people to places where they used to live. For example "Island Man" shows the deep connection between this man and the island where he was born. And also in "Nothing's Changed" it tells us of the poet returning to District Six, in South Africa, and his feelings towards the area. To begin with, "Island Man" is about an unnamed man (even though I have found out that it was written for her husband- John Agard), who has travelled to London for work, but still yearns for the Caribbean. It seems that he has been dreaming of his island and for a few minutes on waking it is if he his back there. ...read more.

However, unlike in "Nothing's Changed" where the poet only shows his resentment to the area, "Island Man" uses transferred epithet e.g. ... "surfacing defiantly". This is an English idiom which shows that he is very much part of the English culture even if he doesn't believe he is. Finally, Grace Nichols uses presentational techniques in her poem to further emphasise this man's connection to his island. The use of no punctuation, apart from capital letters, firstly suggests enjambment and could suggest that this is not a one off event. This dream may have been going on for many years. The poet shows that this man has a large connection with his place of birth but no real connection to where he lives. London is presented as a place that he is in, whilst the Caribbean is seen as his home- how could London ever compete with that. The second poem that I will be exploring is "Nothing's Changed". ...read more.

As Afrika fought so hard to end the apartheid, it seems that the title is correct because nothing has changed. He was connected to this area because of the apartheid but now, this type of segregation, he is unable to fight against. Throughout this poem the type of language used like "small, mean" makes the man feel rejected from the area. Similarly, with the comparisons of the inn and working man caf�, it makes the man feel rejected because of the segregation. In "Island Man" the language, when describing the island is inviting and pleasing. As the reader can see his connection to this place is not because he likes it; he is connected by the inequality and the hatred of what people have done to the area. In conclusion, both poets have different techniques to express people's connections to places, depending on how they feel towards an area- whether it is hatred or just missing it. Both of the poems I looked at were different in how the poet was connected to a place but used some techniques to express either longing or hatred. ...read more.