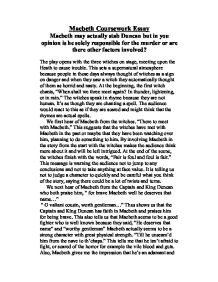 Macbeth Coursework Essay Macbeth may actually stab Duncan but in you opinion is he solely responsible for the murder or are there other factors involved? The play opens with the three witches on stage, meeting upon the Heath to cause trouble. This sets a supernatural atmosphere because people in those days always thought of witches as a sign on danger and when they saw a witch they automatically thought of them as horrid and nasty. At the beginning, the first witch chants, "When shall we three meet again? In thunder, lightening, or in rain." The witches speak in rhyme because they are not human. It's as though they are chanting a spell. The audience would react to this as if they are scared and might think that the rhymes are actual spells. We first hear of Macbeth from the witches. "There to meet with Macbeth." This suggests that the witches have met with Macbeth in the past or maybe that they have been watching over him, planning to do something to him. By involving Macbeth in the story from the start with the witches makes the audience think more about it and will be left intrigued. At the end of the scene, the witches finish with the words, "Fair is foul and foul is fair." This message is warning the audience not to jump to any conclusions and not to take anything at face value. It is telling us not to judge a character to quickly and be careful what you think of the story, saying there could be a lot of twists and turns. We next hear of Macbeth from the Captain and King Duncan who both praise him, " for brave Macbeth well he deserves that name..." " O valiant cousin, worth gentleman..." Thus shows us that the Captain and King Duncan has faith in Macbeth and praises him for being brave. ...read more.

She tells him to hide is feelings and be 'th'innocent flower, but be serpent under it.' Lady Macbeth seems to be the person in charge of their relationship. I can tell this because she says things like 'You shall' giving him commands. Also, she cuts Macbeth off while speaking, not knowing what was going to be said next. Quote, "Leave all the rest to me." This shows that Lady Macbeth likes to be the one in control of everything and be the leader. Before Lady Macbeth cuts off Macbeth he says, "We will speak further..." This suggests that he was going to tell her about Malcolm becoming the Heir, and how the quickest way becoming King is not by murder. It also shows that Macbeth seems to be more of a thinker unlike Lady Macbeth who seems to be straight to the point. He seems to like having time to think things over and to work it out in his head. When Duncan is approaching Macbeth's castle, he says a comment. "This castle hath a pleasant seat.! Thuis is dramatic irony because Duncan is complementing the castle saying how pleasant and nice it is yet later on in the play he actually gets killed there. So It's not so pleasant after all. Duncan is greeted by an overflow of polite comments from Lady Macbeth that comes as a surprise to the audience. Quote, "All our services, in every point twice done and then done double." I think this shows hat Lady Macbeth can be very false, she is a good charmer towards people and knows how to put on a face. By doing this she doesn't make herself look suspicious in any way and the King can feel safe and relaxed about the situation they are in. Also, King Duncan tells Lady Macbeth about his promise to Macbeth to have more honours, "And shall continue our graces towards him." ...read more.

As Macbeth here's the bell ring so forth he went to do his 'b****y business'. I don't think that the death of King Duncan was solely responsible to Macbeth because the witches and Lady Macbeth also contributed to this. I think all of them had a part in King Duncan's death and all were responsible. The witches are firstly responsible for the death of the King because they put the idea of Macbeth becoming King of Scotland into his head by giving him the three prophecies. Where one of the prophecies came true, the witches made Macbeth automatically think that all three would come true and wanted to make sure they did, and that triggered his brain into thinking murder. Secondly, I think Lady Macbeth is responsible because she jumped to the conclusion that she would become Queen as soon as she read the letter. She taunted Macbeth with words such as 'Coward' and told him he's too full of the milk of human kindness making him want to prove her wrong, and show her that he is not a coward. To conclude, even though the others are partly responsible for the death of Duncan I think Macbeth is most responsible because he believed what the witches had told him, so if he weren't so gullible, then the thought of killing King Duncan wouldn't have poisoned his mind. Also, had Macbeth not have told his wife about the witches, then he would have made his own decision about whether to kill King Duncan or not. I think Macbeth relies too much on other people's opinion because he wanted the opinion of Lady Macbeth on what to do, but also from other people, saying that he should live the life he has and there is no need for any more power. Plus, we can't forget that Macbeth was the actual person who plunged the dagger into King Duncan's chest. Putting all this information together I think I can safely say it was a series of unfortunate events that lead up to the death of King Duncan. The End. By Zara Wines ...read more.