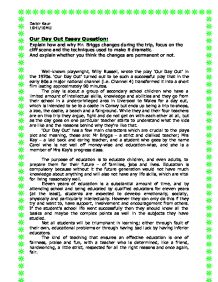 Our Day Out - How and why Mr Briggs changes

Dalbir Kaur 10H1/10MU Our Day Out Essay Question: Explain how and why Mr. Briggs changes during the trip, focus on the cliff scene and the techniques used to make it dramatic. And explain whether you think the changes are permanent or not. Well-known playwright, Willy Russell, wrote the play 'Our Day Out' in the 1970s. 'Our Day Out' turned out to be such a successful play that in the early 80s a major national channel (i.e. Channel 4) transformed it into a short film lasting approximately 90 minutes. The play is about a group of secondary school children who have a limited amount of intellectual skills, knowledge and abilities and they go from their school in a underprivileged area in Liverpool to Wales for a day out, which is intended to be to a castle in Conwy but ends up being a trip to shops, a zoo, the castle, a beach and a fairground. While they and their four teachers are on this trip they argue, fight and do not get on with each other at all, but as the day goes on one particular teacher starts to understand what the kids are like and the reasons behind why they're like that. 'Our Day Out' has a few main characters which are crucial to the plays plot and meaning, these are: Mr Briggs - a strict and disliked teacher; Mrs Kay - a laid back and caring teacher, and a student who goes by the name Carol who is not well off money-wise and education-wise, and she is a member of Mrs Kay's progress class. The purpose of education is to educate children, and even adults, to prepare them for their future - of families, jobs and lives. Education is compulsory because without it the future generation would not have much knowledge about anything and will also not have any life skills, which are vital for living reasonably well. ...read more.

Along with Mr Briggs and Mrs Kay there is also one more key character, Carol, who is a member of Mrs Kay's progress class. Regardless of Carol's learning problems she does understand of how and why her chances in life are limited to some extent - she is realistic. An example of this is when Briggs and Carol were on top of the cliff and Briggs was saying to Carol 'what's to stop you working hard at school...getting a good job...moving out here when you're old enough?' Carol replied contemptuously 'Don't be friggin' stupid.' so she knows what she can and can't achieve in life; she's intelligent enough not to listen to anything anyone tells her just to cheer her up, enliven and encourage her. Mrs Kay took advantage of this trip by taking the class to the zoo, with the disapproval of Mr Briggs. At the zoo a group of the children got into conversation with Mr Briggs about a bear and the wild. Carol's experience above the cliff mirrored that of the comments the bear got from other students by how they'd not be able to survive, 'lived all it's life in a pit...won't know nothin' else so it won't want nothin' else' and how Briggs said to Carol 'How could you live here? What would you do? Where would you live?', therefore both the bear and Carol would not be able to survive in the wild or in Wales because they don't know how to and also because they've not been taught or experienced life out of the pit/Liverpool. This scene made Mr Briggs realize that these children are not as dim as he'd previously thought and that they are realistic and not gullible at all. Unlike Briggs, Mrs Kay sees her pupils within a larger social context by entirely understanding the backgrounds of the children. Mrs Kay shows this type of behavior when Mr Briggs is quarreling with her about how the children are so much like animals, and Mrs ...read more.

you...getting a good job...and moving out here when you're old enough' to encourage her and give her hope, but to his amazement his attempt failed and Carol replied 'Don't be friggin stupid'. Russell has made this particular scene very dramatic by using brief and straightforward stage directions such as 'he gingerly approaches her' and has selected the vocabulary very carefully to make it even more dramatic. Throughout the whole play Mr Briggs has given the impression that he has been changing and developing into a better person but I do not think that these changes to Mr Briggs are permanent. I think this because when the coach gets nearer to the school he 'puts his tie back to normal...straightens his hair...combs his hair', if he were to change for good then why would he bother? The reason for him changing his 'fun' appearance back to his strict one is obviously because he don't want to stay that way or be seen like that, this trip was a one-off time for him. Another example to support my point is also at the end of the play when Mr Briggs 'pulls open the film and exposes it to the light, crumbles it up', Briggs appears as if he's embarrassed and humiliated by the way he acted and he wouldn't have wrecked the film if he was to change permanently - I get the idea of him being embarrassed and humiliated because if he wasn't to change permanently for a different reason he'd still want to treasure the memories unless he was to be completely heartless, which he isn't. The only change that looks as if it is permanent is the amount of sympathy and understanding he now has for the kids and I also think that he'll be a little less harsh, like at the end he tells Linda off softly about her non-uniform. So in my opinion Mr Briggs will be a better person but there won't be as much change that would be preferred. ...read more.