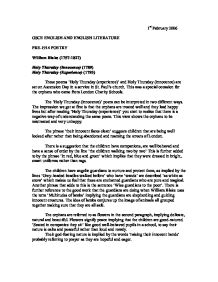 1st February 2006 GSCE ENGLISH AND ENGLISH LITERATURE PRE-1914 POETRY William Blake (1757-1827) Holy Thursday (Innocence) (1789) Holy Thursday (Experience) (1793) These poems 'Holy Thursday (experience)' and Holy Thursday (innocence) are set on Ascension Day in a service in St. Paul's church. This was a special occasion for the orphans who came from London Charity Schools. The 'Holy Thursday (innocence)' poem can be interpreted in two different ways. The impression we get at first is that the orphans are treated well and they lead happy lives but after reading 'Holy Thursday (experience)' you start to realise that there is a negative way of understanding the same poem. This view shows the orphans to be mistreated and very unhappy. The phrase 'their innocent faces clean' suggests children that are being well looked after rather than being abandoned and roaming the streets of London. There is a suggestion that the children have companions, are well behaved and have a sense of order by the line 'the children walking two by two' This is further added to by the phrase 'In red, blue and green' which implies that they were dressed in bright, smart uniforms rather than rags. The children have angelic guardians to nurture and protect them, as implied by the lines 'Grey-headed beadles walked before' who have 'wands' are described 'as white as snow' which makes us feel that these are enchanted guardians who are pure and magical. ...read more.

In the previous poem 'Holy Thursday (innocence)' he says that the children 'raise to heaven the voice of song'. He obviously believes that songs can lift a spirit and in 'Holy Thursday (experience)' it hurts him, that there are no songs of joy going heavenwards form children who are so pure. Normally to see how rich a country a country is you measure the amount of wealth the country but here Blake is measuring the happiness by asking if their singing which is usually a sign of happiness from children. The third stanza describes their happiness in terms of the climate. Their lives are like a place where the; 'sun does never shine. And their fields are bleak and bare.' In the third line he contrasts their journey through life with that of Christ's crown of thorns. The image that this reflects is of a painful way through life. And the next line is echoed in a later work by C.S Lewis who uses the term eternal winter to mean a place, like Siberia, that is unbearably sad and where happiness does not exist. This metaphor makes us aware that there is never any joy of warmth in their lives and that emotionally they are completely bereft and emotionally starved of love. In the last paragraph he again refers to the environment and the weather to describe a situation where everything would be all right and 'Babe cam never hunger there'. ...read more.

These military officers have canes to beat the children with as it says 'with wands as white as snow.' This idea of the children being part of a military force is backed up by the quote 'seated in companies they sit.' Because the army is sectioned off into companies, they stand in a certain order and they are very obedient. 'These flowers of London town' implies that the children are innocent and pure but like flowers they will eventually die. Flowers are also vulnerable and easily ruined. The comparison between the groups of children and the 'multitudes of lambs' implies that the orphans like the lamps, group together like pure innocent creatures. The image of the lamb also stands for the idea of vulnerability and sacrifice. Like the lambs the orphans are forced to do what the carers tell them to do, and may face an early death as victims of a cruel world. 'Thousands of little boys and girls' suggests that there are any poor orphans who are homeless. This shows that there is a large scale of poverty. The orphans plead for help by 'raising their innocent hands.' 'Like a mighty wind...voice of song' implies that the wind is like a destructive hurricane ready to sweep their lives away. Ironically the 'wise guardians of the poor' are there to look after the orphans for the money and are not concerned about the orphans at all. The rhythm of the poem in this negative view is a like a strict military march. ?? ?? ?? ?? ...read more.