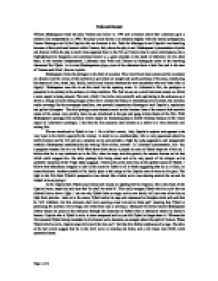 Pride and Honour. He uses Tybalts character to emphasise how destructive honour can be when it is taken to the extremes.

Pride and Honour William Shakespeare wrote the play 'Romeo and Juliet' in 1595 and a director called Baz Luhrmann gave a modern film interpretation in 1996. The play's main theme is a romantic tragedy with the central protagonists, Romeo Montague and Juliet Capulet who are doomed to die. Both the Montague's and Capulet's are brawling because of their pride and honour within Verona, Italy where the play is set. Shakespeare's presentation of pride and honour within the play is much more apparent than in the film as I believe that in some circumstances he is highlighting how dangerous and pointless honour is, a good example is the death of Mercutio. On the other hand, in the modern interpretation, Luhrmann uses Pride and Honour to distinguish some of the brawling characters like Tybalt. As in most Shakespearian plays, most of the characters have a fatal flaw and in the case of 'Romeo and Juliet', this sin is pride. Shakespeare wrote the prologue in the form of a sonnet. ...read more.

In Luhrmann's presentation, Act 1 has a spaghetti western feel to it as Wild West show down music is played as soon as Tybalt steps out of the car. I believe that he is very territorial as in the film, when he steps onto the ground, the camera focuses on his feet which could suggest this. His attire portrays him being smart and to be very proud of his religion as his symbolic waistcoat of the Virgin Mary suggests. I believe this to be ironic due to the spiteful nature of Tybalt. I believe that Manichean imagery is used in this scene as Tybalt is all in black suggesting that he is a villain, he means business. Another symbol of his family pride is the image of the Capulet coat of arms on his guns. The fight in the film from Tybalt's perspective was almost like a ballet as he was dancing around the set and he looked to be enjoying it. At the Capulet ball, Tybalt sees Romeo and insists on fighting him but Capulet, who is the head of the Capulet house, stops him and says that 'he shall be endur'd'. ...read more.

The speech gives us a larger insight into the character and his personality as it is full of puns and innuendos to show how intelligent he is. He comes across as a very lively person where Romeo says that he has 'Dancing shoes with nimble soles' which portrays that he could be confused about his sexuality as he dresses as a woman and tries to act like one whilst dancing at the Capulet ball. Mercutio is full of energy and is always making jokes and teasing other characters. He also antagonises Tybalt when he says that he is the 'King of cats' and a 'Rat-catcher'. His lines are mostly filled with word play even when he is dying when he says 'Ask for me tomorrow, and you shall find me a grave man.' Mercutio is playing on the double meaning of the word 'grave' as it can mean serious and dead. Mercutio is the first person to die in the play and all his energy suddenly disappears. As he dies, he says 'a plague o' both your houses' which reminds the audience of how dangerous pride and honour can be. ?? ?? ?? ?? Page 1 of 2 ...read more.

This begins to show some elements of good analysis but as an overall response it is underdeveloped and needs to be expanded in to a more in depth analysis; particularly focusing on language, structure and form.