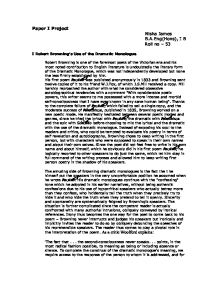 Robert Browning's Use of the Dramatic Monologue.

Paper I Project Nisha James B.A.Eng(Hons), I B Roll no - 53 I Robert Browning's Use of the Dramatic Monologue Robert Browning is one of the foremost poets of the Victorian era and his most noted contribution to English literature is undoubtedly the literary form of the Dramatic Monologue, which was not independently developed but none the less firmly established by him. His first poem Pauline was published anonymously in 1833 and Browning sent twelve copies of it to his friend W.J.Fox, of which J.S.Mill received a copy. Mill harshly reproached the author with what he considered obsessive autobiographical tendencies with a comment "With considerable poetic powers, this writer seems to me possessed with a more intense and morbid self-consciousness that I have ever known in any sane human being". Thanks to the complete failure of Pauline, which failed to sell a single copy, and the moderate success of Paracelsus, published in 1835, Browning worked on a new poetic mode. He manifestly hesitated between several poetic modes and genres, since he tried the lyrical with Pauline, the dramatic with Paracelsus and the epic with Sordello before choosing to mix the lyrical and the dramatic with the use of the dramatic monologue. ...read more.

To complete the construal of the dramatic monologue's meaning, we require access to the response of the person to whom it is addressed, and for whom its rhetorical manoeuvres are intended. In withholding that response Browning forces the reader himself to provide it, and thus compels him to hypostasize a meaning beyond the periphery of the persona's intention.' Robert Langbaum saw the form as a continuation of an essentially Romantic "poetry of experience" in which the reader experiences a tension between sympathy and judgment. Glenn Everett contested this view with his own theory of 'engagement, then detachment' as he saw the role of the listener as one of discovery which engages the imagination, but the listener must remain detached and abstain from passing judgment until the work is known as a whole. Glenn Everett proposed that Browningesque dramatic monologue has three requirements: 1. The reader takes the part of the silent listener. 2. The speaker uses a case-making, argumentative tone. 3. We complete the dramatic scene from within, by means of inference and imagination. Two unique and differing examples of Browning's dramatic monologues are found in his poems Fra Lippo Lippi and Andrea del Sarto. ...read more.

The name of the historical main character gives us a clue to the time, and there is no need to add a subtitle as it occurs in "Pictor Ignotus", "Florence, 15- ". Several places are mentioned: Cosimo de Medici's house, the door of a nearby house. On a larger geographic scale, Florence and Italy make up the frame of the poem. Italy, first, in the title, and thanks to the onomastics (Cosimo de Medici, Old Aunt Lapaccia, the Camaldolese monks) combined with the names of famous artists like Giotto, Fra Angelico, Lorenzo Monaco, Masaccio (alluded to as " Hulking Tom "). Far from being fastidious name-dropping on Lippo's part, these references made in passing belong to the daily background and occupations of the characters. The same goes for the cultural aspects: carnival time and its festivities, the Florentine magistrates, Chianti evoked in an apparently spontaneous metaphor. Similarly, in Andrea del Sarto lines such as "And look a half-hour forth on Fiesole","Who listened to the Legate's talk last week" give us a clue as to the historical and geographical location of the poem. Browning organizes around his speakers a solid network of metaphors and cultural traits whose function - if not aim - is to legitimize the words of the speaker, and consequently their realistic quality. Thus in Lippo's mouth the word "villa" takes up its Italian origin. ...read more.