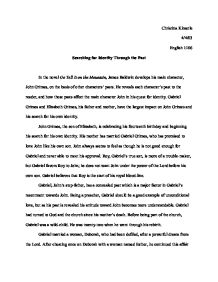 Searching for Identity Through the Past.

Christina Kimerle 4/4/03 English 1106 Searching for Identity Through the Past In the novel Go Tell It on the Mountain, James Baldwin develops his main character, John Grimes, on the basis of other characters' pasts. He reveals each character's past to the reader, and how these pasts affect the main character John in his quest for identity. Gabriel Grimes and Elizabeth Grimes, his father and mother, have the largest impact on John Grimes and his search for his own identity. John Grimes, the son of Elizabeth, is celebrating his fourteenth birthday and beginning his search for his own identity. His mother has married Gabriel Grimes, who has promised to love John like his own son. John always seems to feel as though he is not good enough for Gabriel and never able to meet his approval. Roy, Gabriel's true son, is more of a trouble-maker, but Gabriel favors Roy to John; he does not want John under the power of the Lord before his own son. Gabriel believes that Roy is the start of his royal blood-line. Gabriel, John's step-father, has a concealed past which is a major factor in Gabriel's resentment towards John. Being a preacher, Gabriel should be a good example of unconditional love, but as his past is revealed his attitude toward John becomes more understandable. ...read more.

She was in need of someone for her to lean on for a change. He promised her that he would love John as his own son. Elizabeth used Gabriel to hide from her past. He was her mountain to hide behind. Both of them, however, had been searching for a sign of forgiveness and believed their meeting was the sign. Due to their pasts, Elizabeth and Gabriel feel powerlessness and hatred. Elizabeth and Gabriel have faced the injustices of the world, but John cannot face it until he comes to it. The biggest hurdle John faces is acceptance in his search for identity. John lives in Harlem and his family is greatly involved in the church, considering his father, Gabriel, is a preacher. John notices all the sinners in his neighborhood and is disgusted by their actions. His brother Roy, on the other hand, takes joy in the sinners' actions. Gabriel's stronger love for Roy is not understandable to John because of the harsh life that Roy leads. John has committed a sin that weighs heavy on his heart; he masturbated in the boy's bathroom to the thoughts of the older boys. Not only faced with acceptance by his father, John wants acceptance of the Lord after this sin and his questions of his sexuality. ...read more.

He may fall, and each day is a new battle he will fight. And he has not won his father's love, but the struggle has been altered. It is no longer man against boy; it is now man against man. Go Tell It on the Mountain is a description of one boy's search for himself. Not only is John searching for his identity but also for love. He struggles with the decision of what path is best for him and best for his relationship with his father, Gabriel. With constant reminders of not being accepted, John doubts himself throughout the novel. He is greatly influenced in all his decisions by his parents' thoughts and opinions. Each cruel remark that is made towards him by his father seems to push him closer to the path Gabriel has taken in life. John is not only searching for approval from his father, but also social approval. He watches the white people walk through the streets and thinks about being accepted by them all one day, despite his father's disgust of white people. He is hoping to be loved and accepted, but is worried about his sexuality (class notes). In the end of the novel, John becomes saved and he finds acceptance with the church and God; he no longer worries as much about his father's acceptance. 2 ...read more.