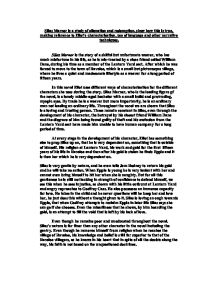 Silas Marner is a study of alienation and redemption, show how this is true, making reference to Eliot's characterisation, use of language and other narrative techniques.

Silas Marner is a study of alienation and redemption, show how this is true, making reference to Eliot's characterisation, use of language and other narrative techniques. Silas Marner is the story of a skilful but unfortunate weaver, who has much misfortune in his life, as he is mis-treated by a close friend called William Dane, during his time as a member of the Lantern Yard sect. After which he was forced to move to the town of Raveloe, which is a small but picturesque village, where he lives a quiet and madesonate lifestyle as a weaver for a long period of fifteen years. In this novel Eliot uses different ways of characterisation for the different characters she uses during the story. Silas Marner, who is the leading figure pf the novel, is a lonely middle-aged bachelor with a small build and protruding, myopic eyes. By trade he is a weaver but more importantly, he is an ordinary man not leading an ordinary life. Throughout the novel we are shown that Silas is a loving and trusting person. These remain constant in Silas, even through the development of his character, the betrayal by his closest friend William Dane and the disgrace of him being found guilty of theft and his exclusion from the Lantern Yard sect have made him unable to have human company for a long period of time. At every stage in the development of his character, Eliot has something else to prop Silas up on, that he is very dependant on, something that is outside of himself. ...read more.

Evidence that he alienated himself from the village: "He was generally spoken of as a poor mushed Creature" and that avoidance of his neighbours, which Had before been referred to his ill-will, and to a Probable addiction to worse company, was now Considered mere craziness There is still one thing that he will trust and believe in and that is his gold. He believes this because it is not a living things and does not have feelings so it will not be able to betray him. The milieu has a large part to play in this alienation due to the setting that Silas has found himself in. There are great differences between the two settings that Silas has lived in, he was never really alienated from Lantern Yard until right at the very end of his membership, but in Raveloe he is because of the superstitious characteristics that the village people posses. The way in which Silas marner is alienated can also be linked with novels structure is cyclical and it is also almost liturgical to the Christian calendar year, as time is the crucial factor in the novel as the more time that passes the more changes it brings. The alienation can also be linked with the narrative voice of George Eliot; she is motivated by the theme of this novel and guides the views of the readers towards her views. ...read more.

Throughout the novel the readers response is guided by the narrative voice, this is because of the explicit moralizing during the persona that is adopted by Eliot and this guides the didactic element to the novel. The persona throughout this novel is on of a sensitive and a wise commentator upon the human life. The narrator is both sympathetic and humane towards the characters. The didactic elements are very simple to see and should be picked up by even the simplest of readers, they are 'homely' and are observations based upon natural imagery. The narrative' structure is divided up into two parts. The development of Silas Marners character is put into part one and this has a main and a sub plot. The main is Silas Marner and his life and the sub plot being Godfrey and Dunsten. The second part involves a main and a sub plot also. The main plot being Silas and Eppie, with the sub plot again involving Godfrey and his wife Nancy. The different parts that structure the novel are forever changing in the novel and this guides the reader to a much better understanding of Silas's character and the divine power of providence, which involves the wheel of life that will always turn a full circle to change peoples luck. The understanding of this is vital to the plot and understanding of the story. All this contributes and conveys the impression to the reader the views held by George Eliot that human life is very much conveyed by didactic intentions. ...read more.