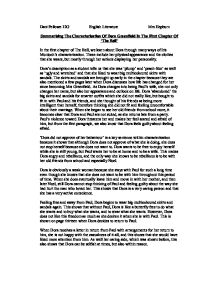 Summarising The Characterisation Of Dora Greenfield In The First Chapter Of 'The Bell'.

Dani Pellowe 12G English Literature Mrs Hepburn Summarising The Characterisation Of Dora Greenfield In The First Chapter Of 'The Bell' In the first chapter of The Bell, we learn about Dora through many ways of Iris Murdoch's characterisation. These include her physical appearance and the clothes that she wears, but mostly through her actions displaying her personality. Dora's description as a student tells us that she was 'plump' and 'peach-like' as well as 'ugly and wretched' and that she liked to wear big multicoloured skirts with sandals. The skirts and sandals are brought up early in the chapter because they are also mentioned a few pages later when Dora discusses how life has changed for her since becoming Mrs Greenfield. As Dora changes into being Paul's wife, she not only changes her name, but also her appearance and outlook on life. Dora 'abandoned' the big skirts and sandals for smarter outfits which she did not really like, but bought to fit in with Paul and his friends, and she thought of his friends as being more intelligent than herself, therefore thinking she did not fit and feeling uncomfortable about their marriage. ...read more.

This shows that without Paul, Dora is like a butterfly free to do what she wants and to buy what she wants, and to wear what she wants. However, Dora does not like this freedom as much as she desires it when she is with Paul. This is shown on page thirteen when Dora decides to return to Paul. When Dora receives a letter in return from Paul with arrangements for her return to him, she is not happy with the casualness of it all, and this shows that she would have liked more attention from him. As well her caring side, which was shown before, this also shows that Dora can be selfish at times, but also within reason. Because of the way that Paul had expressed his love for her before, Dora had expected Paul to com 'running up to London to receive her' and because of the fact that he didn't, I think Murdoch is also giving us good characterisation of Paul and how he is unpredictable. ...read more.

This small description of her face shows that Dora is quite proud of the way she looks and whether or not she is trying to impress Paul, she believes that she will. However her facial appearance made Dora feel, her body obviously makes Dora feel uneasy and she does not like it as much as she Murdoch says 'Feeling fat' and also by using the onomatopoeia 'squeezed' to make Dora sound fat and rather large in size. Dora continues to moan in her thoughts about her shoes and her skirt being too tight, which gives the impression that she is like a whinging child who is not growing up. This links to the idea of her marriage to Paul which is uncomfortable for her because of the age difference where she feels like a child still. It is almost as if Dora is thinking of Paul as a grown up, and herself as a child and therefore she feels the need to whinge about something, and her chosen something is the tightness of everything she is wearing, coincidently, they are clothes she is wearing to impress Paul. ...read more.