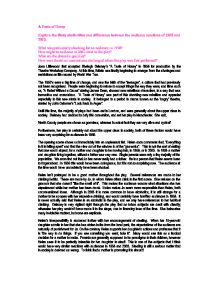 Taste of Honey - Explore the likely similarities and differences between the audience reactions of 1958 and 2003.

A Taste of Honey Explore the likely similarities and differences between the audience reactions of 1958 and 2003. What was particularly shocking for an audience in 1958? How might an audience in 2003 react to the play? What are the dramatic qualities? How were theatrical conventions challenged when this play was first performed? Joan Littlewood first accepted Shelagh Delaney's "A Taste of Honey" in 1958 for production by the Theatre Workshop Company. At this time, Britain was finally beginning to emerge from the shortages and restrictions on life caused by World War Two. The 1950's were a big time of change, and saw the birth of the "teenager", a culture that had previously not been recognised. People were beginning to refuse to accept things the way they were, and films such as, "A Rebel Without a Cause" staring James Dean, showed new rebellious characters, in a way that was innovative and scandalous. "A Taste of Honey" was part of this shocking new rebellion and appealed especially to this new strata in society. It belonged to a period in drama known as the "angry" theatre, started by John Osborne's "Look Back in Anger". ...read more.

Black communities were only known of in London, Bristol, Cardiff and Liverpool. They were not common anywhere else. The dramatic entrance of a black actor at this time would have certainly have made a huge impact on the audience, and undeniably got their attention. She then carries on the scandal by revealing to him that she is 18, an obvious lie. The "boy" is not the only black character in the play; we are also told that Jo is to have a black midwife to deliver her baby. As the play goes on, Jo reveals that she is pregnant with the baby of this black sailor. Her pregnancy towards the end becomes very obvious, and would have appalled audiences. It was not thought of as proper to have pregnant women on stage, by no means would they have expected the woman carrying the baby to be 15 and carrying a black child! It was unheard of! Even in 2003 society would be very shocked to see a 15-year-old girl pregnant. Delaney has tackled sexual scandal in a new way like nothing before it. ...read more.

In order to help teach Jo about the baby Geof buys her a life size doll. Her reaction to the doll is very extreme. She suddenly looses all control and breaks down, because she knows that her baby is going to be black. I think at this at this instant the audience feels a lot of sympathy with Jo. Although what she is doing is deemed to be deviant and dreadful, the audience realises that she too is just a person with feelings. She is really just a young girl living in an adult world. To an audience in 2003 having a black baby wouldn't seem a surprising situation for someone to be in, and perhaps the reaction of Jo may seem to them to be peculiar, but even without this understanding Delaney definitely wants the audience to feel compassion. The way in which this play is meant to be staged is very simply. There is not much scenery, and there are only two backdrops. In an era of turmoil and uncertainty, the issues depicted in the play were precisely the ones that dominated lower class Britain, but, ironically, they were not the ones that were shown by the media, for they were considered to be too lowly to be worthy of depiction ...read more.