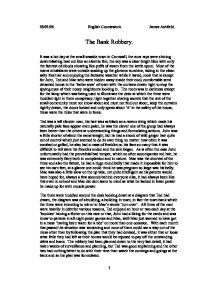 06/01/04. English Coursework. James Ashfield. The Bank Robbery. It was a hot day at the small seaside town in Cornwall, the suns rays were shining down blasting heat out like an electric fire, the sky was a clear bright blue with only the faintest of clouds showing like puffs of steam from the kettle spout. Most of the towns inhabitants were outside soaking up the glorious sunshine, taking in the clean salty fresh air and enjoying the fantastic weather while it lasted, most that is except for John, Ted and Mac who were hidden away inside their cool, comfortable semi detached house in the 'better area' of town with the curtains drawn tight to stop the spying eyes of their nosey neighbours looking in. The room was in darkness except for the lamp which was being used to illuminate the desk at which the three were huddled tight in there conspiracy, tight together sharing secrets that the rest of the small community must not know about and must not find out about, keep the curtains tightly drawn, the doors locked and only speak about 'it' in the safety of the house, these were the rules that were in force. Ted was a tall slender man, his hair was as black as a ravens wing which made his naturally pale face appear even paler, he was the clever one of the group had always been better than the others at understanding things and formulating actions. ...read more.

Ted and John would go into the bank armed with the shotguns that they had bought from an old farmer some miles away, Mac would wait outside in the car ready to drive them away, they would then dump the car, bury the money using only small amounts gradually to pay off their debts. Friday was the day it was all going to happen! Friday soon came, the three spent the morning going over the plans one more time checking each detail and making sure that each one knew what their job was. They arrived at the car park on time nerves were beginning to take hold and when Mac stated that the get away car was not in its place John lost control and flew into a fit of rage telling Mac in no uncertain terms that this was not the time or place to be fooling around and to get a grip. It was Ted who took over confirming that the car was not in its place and telling John to get a grip, horror of horrors the plan was already starting to go wrong what to do now? "We'll take that one over there instead," said Ted taking control and pointing to a red Volvo, "its too late to back out now". They took the car and drove around to the High Street, Mac parked up on the opposite side of the road to the bank and the other two got out. ...read more.

burger with all the trimmings, and off he went making sure to take the car keys with him so that no one could steal it. John and Ted came backing out of the bank they didn't want to run for fear of drawing attention to themselves, but they knew that they only had a matter of minutes before Miss Moneypenny would be on the blower to the local cops. Straight over to the red Volvo in and away was the plan, and that's just what they did straight over to the red Volvo in, but not away, because Mac wasn't there and neither where the car keys, Ted and John looked around desperately, "where is he" yelled Ted, " I don't believe it, THE STUPID IDIOT, he's over there in the Mc Donald's stuffing his great fat face, the greedy pig". The cops arrived in seconds sirens wailing, blue lights flashing and the High Street was under siege, Ted and John had no chose but to go quietly, as after all they looked rather obvious sat outside the bank with ski masks and rubber gloves in place, violin cases slug on the back seat and Tesco carrier bags overflowing with money in their possession, it really wasn't very difficult for the police to find the robbers. Meanwhile Mac sat happily munching away on his burger dreaming of all the burgers that his newfound fortune would buy him! 1 ...read more.