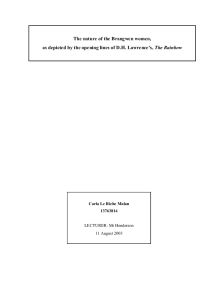 The Brangwen women in The Rainbow (by D. H. Lawrence), are depicted in direct contrast to their male counterparts.

The Brangwen women in The Rainbow, are depicted in direct contrast to their male counterparts. Lawrence describes the women as "different" (42), directly following his detailed description of the Brangwen men. Although admittance is made that the women did share similar circumstances, heritage and experience to the men, for "on them too was the drowse of blood-intimacy, calves sucking and hens running together in droves...", it is emphasised that the women looked outwards, removing themselves figuratively from the "blind intercourse of farm-life, to the spoken world beyond." (42). With this description, Lawrence suggests that the women were discontent with assuming a position of participation amongst the "blind intercourse" of unconscious activities that were assumed of them, and that the men were content with practicing. ...read more.

While it seems a strange metaphor, it is the woman who looks out to the "active scope of men", and who is concerned with government, education and progress in a "magic land to her, where secrets were made known and desires fulfilled."(43). The Brangwen women are depicted as looking at the children of the upper classes and wondering why their children are disadvantaged. Lawrence portrays the women as deciding that the difference is not "money, nor even class. It was education and experience, she decided."(44). Thus, education becomes not a means of social progress for working class children, but rather a thing of inherent value, "a higher form of being", which is why the Brangwen women want it for their own children. The Brangwen women are portrayed according to their "developing being", "she craved to know. ...read more.

important and temporary; the creative and evolving being unable to be contented with contemplation of what is known, but rather has to discover what is new also. (18). Thus, ironically, it is the women in The Rainbow who, "whilst her husband looked out to the back at sky and harvest and beast and land, she strained her eyes to see what man had done in fighting outwards to knowledge... her deepest desire hung on the battle that she heard far off, being waged on the edge of the unknown. She also wanted to know, and to be of the fighting host." (43), provides for the reader the departure point of Lawrence's masterfully depicted journey into discovering a history of the relation between man and what lies beyond him, and the history of the struggle of men to become conscious and to become themselves. ...read more.