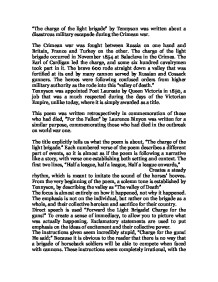 &quot;The charge of the light brigade&quot; by Tennyson was written about a disastrous military escapade during the Crimean war.

"The charge of the light brigade" by Tennyson was written about a disastrous military escapade during the Crimean war. The Crimean war was fought between Russia on one hand and Britain, France and Turkey on the other. The charge of the light brigade occurred in November 1854 at Balaclava in the Crimea. The Earl of Cardigan led the charge, and some six hundred cavalrymen took part in it. The brave 600 rode straight down a valley that was fortified at its end by many cannon served by Russian and Cossack gunners. The heroes were following confused orders from higher military authority as the rode into this "valley of death." Tennyson was appointed Poet Laureate by Queen Victoria in 1850, a job that was a much respected during the days of the Victorian Empire, unlike today, where it is simply awarded as a title. This poem was written retrospectively in commemoration of those who had died, "For the Fallen" by Laurence Binyon was written for a similar purpose, commemorating those who had died in the outbreak on world war one. The title explicitly tells us what the poem is about, "The charge of the light brigade." Each numbered verse of the poem describes a different part of events, so it is almost as if the poem is following a narrative like a story, with verse one establishing both setting and context. ...read more.

The repeated patterning of the use of "theirs" to start three consecutive rows is done to emphasise the position in which the soldiers have found themselves, and the sacrifice they will have to make. You cannot help but empathise with these men who are about to give their lives for the good of their country. Verse three begins with repeated patterning like at the end of verse two, this time to show the extreme danger of their situation, being totally surrounded by their enemies cannon fire"Cannon to the left of them, cannon to the right of them, cannon in front of them" The onomatopoeic phrase "volly'd and thunder'd" is used to give a sense on the actual sounds the soldiers were experiencing inside the valley. They are "storm'd at". This emphasises that it's a full on, 'take no prisoners' kind of attack. It comes across as being very intense, as if they are literally 'riding into the eye of the storm'. In the face of overwhelming odds and horror they are still described as riding "boldly". This emphasises their sheer heroism. "Into the jaws of death, into the mouth of h**l" This language is very simple yet at the same time manages to be very dramatic. Personification is used to make the threat seem even more menacing. The inevitability of the situation is emphasised, there is no way they will all come out of this alive. ...read more.

This is done because it is the same situation; in verse three they were fighting to get down the valley, now they are fighting for their lives trying to get back out of it. The poem ends by instructing us to honour the soldiers. The tone at the end of the poem is quite elevated, in comparison to the sombre tone with which it began. It could be described as an elegy because it remembers those who died, although it is more triumphant in tone than a typical elegy. Tennyson doesn't want us to focus on the dead, and does give details about the losses in the poem. His aim is to portray the courage of the men, not to give a realistic and detailed account of events. Although is refers slightly to military incompetence, this isn't a satirical poem. In a position of respect as poet Laureate, he could never have written a poem that put down the military establishment in the way later poets such as Siegfried Sassoon did in poems such as "base details" and "the general". Although the purpose of the poem is to commemorate the men who died courageously, I cannot help but feel annoyed at the lack of responsibility that is put upon the higher ranks of the military establishment for the tragic loss of life created by their mistake. I would hope that in our more liberal society today, we would never again allow such mistake to be made without questioning it. ...read more.