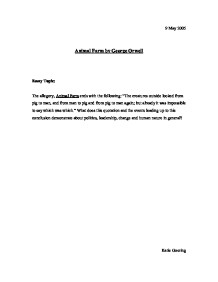 &quot;The creatures outside looked from pig to man, and from man to pig and from pig to man again; but already it was impossible to say which was which.&quot; What does this quotation and the events leading up to this conclusion demonstrate about politics, leadersh

9 May 2005 Animal Farm by George Orwell Essay Topic: The allegory, Animal Farm ends with the following: "The creatures outside looked from pig to man, and from man to pig and from pig to man again; but already it was impossible to say which was which." What does this quotation and the events leading up to this conclusion demonstrate about politics, leadership, change and human nature in general? Katie Goering Animal Farm, by George Orwell, is an allegory that satirizes the change and difficulties in politics, leadership and human nature that arise during the period of time before and after a revolution. Although this novel includes some aspects of all revolutions, it focuses on the Russian Revolution in 1917. As the plot builds, we become aware of the many problems that occur during a revolution. Many of these issues deal with the government and leadership: for example, in various cases the government becomes corrupt and the many dreams that were promised to the people are not fulfilled. Tyrants, like Napoleon and Stalin, ruled through fear and they controled everything. Animal Farm uses animals to portray the characteristics of humans as they revolt against their proprietor to try to create an equal society on their farm. The story reveals how humans can be honest, dishonest, loyal and disloyal. These aspects of change are present in all revolutions, but they were especially evident when the Russians tried to become Communist. During the Russian Revolution, as in Animal Farm, the politics were greatly changed and corrupted. ...read more.

43) was changed to require that no animal should sleep in a bed with sheets. Therefore, the pigs sleep in beds without sheets. The pigs, and ultimately Napoleon suppress all of the information the animals receive. This gives Napoleon and Squealer a chance to re-write history. Squealer claims that it was Napoleon's idea to build the windmill, even though Napoleon was opposed to the idea when Snowball announced it. "That evening Squealer explained privately to the others that Napoleon had never in reality been opposed to the windmill", he continues to declare that "the windmill was, in fact, Napoleon's own creation." (p. 71) Squealer persuades the animals that the windmill is Napoleon's idea, and so he successfully re-writes history in order to focus more attention on Napoleon. The pigs do not want the other animals to concentrate on the lies they are told. They want them to always be thinking of Napoleon. As a result, the pigs decide to change their revolutionary song, 'Beasts of England', because they do not want the animals to be considering another revolution. Songs about Napoleon replace 'Beasts of England'. In addition to this, the flag of Animal farm, which was formerly a green background with a horn and a hoof, is replaced with a plain green flag. The horn and hoof signify the working animals on the farm and Napoleon wants the animals to direct their attention on him, instead of others, so he changes the flag. During the Russian Revolution, the Bolsheviks had many slogans to remind the people of their goals and what they were fighting for. ...read more.

It is vastly difficult to achieve change without any problems or without losing anything that wasn't meant to be lost. The governing system in Animal Farm, the pigs, begin by living up to their dreams for freedom and equality. After some time, they become greedy and corrupt and constantly want more for themselves. They give up trying to help everyone have a better life. With change, like a revolution, come dramatic changes in politics and leadership. As well as this, the actual characteristics of humans are revealed. The best of some people are exposed and the worst of others. By the end of the novel, Animal Farm, the pigs are just the same as humans and the animals could no longer tell the difference. So, although people may try to change for the better, we do not always achieve what we hope for and sometimes we end up making things worse, instead of better. Animal Farm, in the end was no different from before the revolution because few things improved for the animals. The lower class of animals received less food than any other animals on the farm, yet they worked the hardest. There are many ways that the animals are mistreated even before the pigs begin using whips. Moreover, by the end, Animal Farm is renamed Manor Farm, which only further proves how little change there has been. Manor Farm was the original name of the farm when Mr. Jones controlled it, before the revolution. Even though people start a revolution with many hopes of improving their lives and changing everything they disagree with, it seems inevitable to end up without many of the same problems of before the revolution. ...read more.