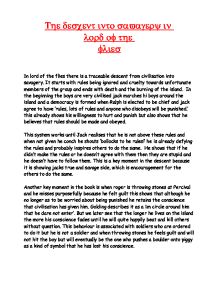 The descent into savagery in lord of the flies.

????????????????????????????? ???????????? ????? In lord of the flies there is a traceable descent from civilisation into savagery. It starts with rules being ignored and cruelty towards unfortunate members of the group and ends with death and the burning of the island. In the beginning the boys are very civilised jack marches hi boys around the island and a democracy is formed when Ralph is elected to be chief and jack agree to have 'rules, lots of rules and anyone who disobeys will be punished.' this already shows his willingness to hurt and punish but also shows that he believes that rules should be made and obeyed. This system works until Jack realises that he is not above these rules and when not given he conch he shouts 'bollocks to he rules!' he is already defying the rules and probably inspires others to do the same. He shows that if he didn't make the rules or he doesn't agree with them then they are stupid and he doesn't have to follow them. ...read more.

When Simon is killed the boys are described as 'one organism' in their dance with this in mind we can see that the boys probably just reacted to the 'thing in the forest' as being the beast but they did have enough time to realise that it was Simon not a beast. However we cannot completely forget that there was a storm and it was dark but how they failed to notice the difference between a small boy and a beast we can only guess at, but one of them must have had an idea that it was in fact Simon not a beast from the top of the mountain. Only Ralph seems o show remorse or sadness at Simon's death saying "we killed him" and piggy seems to want him to forget about it and protect him and the 'littleuns'. When piggy is killed jack is said to have ' thrown a spear with full intent of killing at Ralph' there was no remorse and he doesn't seem to realise that what he did was wrong and he shouts at Ralph 'see they do what I tell them to do.' ...read more.

The chase throughout the island and stopping at nothing to destroy his enemies shows a kind of madness, which we often see in dictatorships. We can see this chase as a way of revenge on Ralph for becoming chief and the way of 'cleansing' the island of anything Ralph had anything to do with. But he fails to realise that by burning the island he is sealing the others to death as he has destroyed all of his food sources and killed the pigs as pointed out by Ralph who says "the fools don't they realise they've burnt the fruit trees what will they eat tomorrow?" Now without these they would not live for long before they would die of starvation. Luckily for him the navy saw the fire, which is ironically Ralph's idea of getting attention. The descent into savagery can therefore be traced right to the beginning of the book with the jealousy of Jack and the unwillingness to obey rules shown by Jack. To the eventual loss of all rules and democracy and the rise of a dictator and the systematic destruction of all that oppose him. ...read more.

A good response that considers the key points; I would like to see further analysis of setting as it is very important symbolically in this novel. Points should also have been made in more detail in order to demonstrate an in depth understanding of the text and the characters.