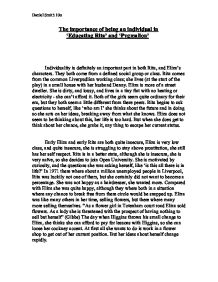 The importance of being an individual in Educating Rita and Pygmalion

The importance of being an individual in 'Educating Rita' and 'Pygmalion' Individuality is definitely an important part in both Rita, and Eliza's characters. They both come from a defined social group or class. Rita comes from the common Liverpudlian working class; she lives (at the start of the play) in a small house with her husband Denny. Eliza is more of a street dweller. She is dirty, and lousy, and lives in a tiny flat with no heating or electricity - she can't afford it. Both of the girls seem quite ordinary for their era, but they both seem a little different from there peers. Rita begins to ask questions to herself, like 'who am I' she thinks about the future and in doing so she acts on her ideas, breaking away from what she knows. Eliza does not seem to be thinking about this, her life is too hard. But when she does get to think about her chance, she grabs it, any thing to escape her current status. Early Eliza and early Rita are both quite insecure, Eliza is very low class, and quite insecure, she is struggling to stay above prostitution, she still has her self respect. ...read more.

the relationship between Frank and Rita is much closer and friendlier then in Pygmalion. They do get on well and there are often hints of romance. Rita has found someone with the knowledge that she longs for, and she tries to learn very hard, despite her natural instincts to argue etc. The relationship is hard as they come from such different backgrounds, as we experience in Pygmalion. The ending of educating Rita is not a final ending, Rita comes back to see frank after an exam, and he is leaving to go to Australia. He goes as far as asking Rita to come with him, but she declines, and leaves the reader with a certain feeling of what happens next. Pygmalion is drawn to more of a conclusion, Eliza and most of the other characters go off to Doolittle's wedding, leaving Higgins alone. It is not a happy ending, as Eliza also turns down an invitation, this time to live with Higgins. The end is not a happy one, as depicted in 'My fair lady' Shaw did this to prove wrong what people thought would happen. ...read more.

The character of frank becomes quite sentimental at the end of the play, inviting her to Australia. This quote does not explain the character Frank so well, as he never seems to latch on to anything much during the play. These continuing themes really make the two plays come together, and the more that you analyze them, the more bonds and patterns you see appear. The links between creator and creature, which you pick up in Frankenstein, follow along some of the paths Shaw and Russell experimented with. "Unfeeling, heartless creator! You had endowed me with the perceptions and passions, and then cast me abroad an object for the scorn and horror of mankind." This quote really applies to Pygmalion; you can imagine Eliza saying something like this to Higgins, and she does say some things that amount to nearly as much, towards the end of the play. Perhaps Rita is luckier, and she and Frank leave on a better note at the end of the pay. All these bonds are important, and they show the similarities, and difference between the plays, and show that individuality is important. Daniel Smith 10o ...read more.