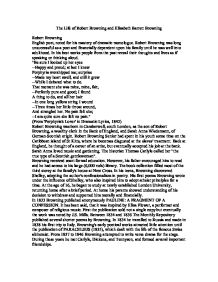 The Life of Robert Browning and Elizabeth Barrett Browning

The Life of Robert Browning and Elizabeth Barrett Browning Robert Browning English poet, noted for his mastery of dramatic monologue. Robert Browning was long unsuccessful as a poet and financially dependent upon his family until he was well into adulthood. In his best works people from the past reveal their thoughts and lives as if speaking or thinking aloud. "Be sure I looked up her eyes --Happy and proud; at last I knew Porphyria worshipped me; surprise --Made my heart swell, and still it grew --While I debated what to do. That moment she was mine, mine, fair, --Perfectly pure and good; I found A thing to do, and all her hair --In one long yellow string I wound --Three times her little throat around, And strangled her. No pain felt she; --I am quite sure she felt no pain." (From 'Porphyria's Lover' in Dramatic Lyrics, 1842) Robert Browning was born in Camberwell, south London, as the son of Robert Browning, a wealthy clerk in the Bank of England, and Sarah Anna Wiedemann, of German-Scottish origin. Robert Browning Senior had spent in his youth some time on the Caribbean island of St Kitts, where he becomes disgusted at the slaves' treatment. Back at England, he thought of a career of an artist, but eventually accepted his job at the bank. Sarah Anna loved music and gardening. The historian Thomas Carlyle called her "the true type of a Scottish gentlewoman". ...read more.

Robert Browning died on December 12, 1889 in Venice in his son's house. Various difficulties made the poet's requested burial in Florence impossible, and his body was returned to England to be interred in Westminster Abbey. Browning's narrative poem, 'Childe Roland to the Dark Tower Came', has inspired Stephen King's King's Dark Tower series, which started in 1982 with The Gunslinger Elizabeth Barrett Browning (1806-1861)) English poet, the wife of Robert Browning, the most respected and successful woman poet of the Victorian period. Elizabeth Browning was considered seriously for the laureateship that eventually was awarded to Tennyson in 1850. Her greatest work, SONNETS FROM THE PORTUGUESE (1850), is a sequence of love sonnets addresses to her husband. Browning's vivid intelligence and ethereal physical appearance made a lifelong impression to Ruskin, Carlyle, Thackeray, Rossetti, Hawthorne, and many others. "What do we give to out beloved? A little faith all undisproved A little dust to overweep, And bitter memories to make The whole earth blasted for our sake. He giveth His beloved, sleep." (from 'The Sleep') Elizabeth Barrett Moulton-Barrett was born at Coxhoe Hall, near Durham. Her father was Edward Moulton-Barrett, whose wealth was derived from sugar plantations in the British colony of Jamaica. Mary Graham-Clarke, her mother, came from a family with similar commercial interests. Elizabeth grew up in the west of England and was largely educated at home by a tutor, quickly learning French, Latin and Greek. ...read more.

Browning's family had treated their slaves well. Her magnum opus, AURORA LEIGHT (1857), was a novel in blank verse about a woman writer, her childhood and pursuit of a literary career. It also dealt such themes as the poet's mission, social responsibilities, and the position of women. LAST POEMS (1862), issued posthumously, and contained some of her best-known lyrics. In her late years, Elisabeth Browning developed an interest in spiritualism. She died, romantically, in her husband's arms on June 29, 1861 in Florence. After her death the writer Edward Fitzgerald expressed no sorrow in his famous letter: ''Mrs. Browning's Death is rather a relief to me, I must say: no more Aurora Leighs, thank God! A woman of real genius, I know; but what is the upshot of it all? She and her s*x had better mind the Kitchen and their Children: and perhaps the Poor: except in such things as little Novels, they only devote themselves to what Men do much better, leaving that which Men do worse or not at all.'' Among Browning's best known lyrics is Sonnets from the Portuguese - the 'Portugese' being her husband's pet name for dark-haired Elizabeth, but it could refer to the series of sonnets of the 16th-century Portuguese poet Luiz de Cam�es. It first appeared in a collected edition in 1850. The work includes the sonnet which begins with the well-known line, "How do I love thee? Let me count the ways". Nay, if there's room for poets in this world A little overgrown (I think there is), Their sole work is to represent the age, Their age, not Charlemagne's. ...read more.