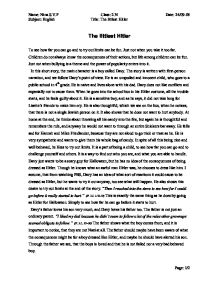 The littlest Hitler To see how far you can go and to try out limits can be fun. Just not when you take it too far. Children do not always know the consequences of their actions, but life among children can be fun. Just not when bullying is a theme and the power of popularity enters into it. In this short story, the main character is a boy called Davy. The story is written with first-person narration, and we follow Davy's point of view. He is an unspoiled and innocent child, who goes to a public school in 4th grade. He is naive and lives alone with his dad. Davy does not like conflicts and especially not to cause them. When he goes into the school bus in his Hitler costume, all the trouble starts, and he feels guilty about it. He is a sensitive boy, and as he says, it did not take long for Lisette's friends to make him cry. ...read more.

Though he knows what an awful man Hitler was, he chooses to dress like him. I assume, that from watching PBS, Davy has an idea of what sort of reactions it could cause to be dressed as Hitler, but he wants to try it out anyway, too see what will happen. He also shows this desire to try out limits at the end of the story. "Then I reached into the stove to see how far I could go before it really started to hurt." (P. 3 L 118-19) This is exactly the same thing as he does by going as Hitler for Halloween. Simply to see how far he can go before it starts to hurt. Davy's father loves his son very much, and Davy loves his father too. The father is not just an ordinary parent. "I liked my dad because he didn't seem to follow a lot of the rules other grownups seemed obligate to follow." ...read more.

in the name of Halloween. Though Lisette is dressed as Anne Frank, she is not as likeable as Davy, so there is a contrast between their costumes and their real character. The ending line of the story, which I quoted above, tells us, that Davy is ready to try out new limits. He is still a young boy, and needs to find out more about choices in life. The themes in this story are to try out limits, the power of popularity and life among children and their innocence and not always awareness of consequences. Though I have not yet touched it, relationships could also be a theme. We hear about the relationship between Davy and his father, the teacher and the students and between each child, but this theme steps a bit in the background of the others. The short story is both a little humorous and serious, and I love how the relationship between the father and son is described. I think it is a very good short story, and probably one of the best I have ever read. Name: Nina S.V.P Class: 2.N Date: 24/09-08 Subject: English Title: The littlest Hitler Page: 1/2 ...read more.