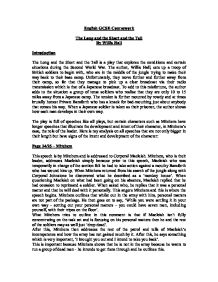 English GCSE Coursework The Long and the Short and the Tall By Willis Hall Introduction The Long and the Short and the Tall is a play that explores the conditions and certain situations during the Second World War. The author, Willis Hall, sets up a troop of British soldiers to begin with, who are in the middle of the jungle trying to make their way back to their base camp. Unfortunately, they move further and further away from their camp, so far that they manage to pick up a clear broadcast via their radio transmission which is that of a Japanese broadcast. To add to this misfortune, the author adds to the situation a group of tense soldiers who realise that they are only 10 to 15 miles away from a Japanese camp. The tension is further mounted by rowdy and at times brutally honest Private Bamforth who has a knack for bad-mouthing just about anybody that comes his way. When a Japanese soldier is taken as their prisoner, the author shows how each man develops in their own way. The play is full of speeches like all plays, but certain characters such as Mitchem have longer speeches that illustrate the development and intent of their character, in Mitchem's case, the role of the leader. Here is my analysis on all speeches that are not only bigger in their length but have signs of the intent and development of the character: Page 24/25 - Mitchem This speech is by Mitchem and is addressed to Corporal Macleish. ...read more.

He says to me 'Bammo, my old son, the British army's in a desperate position. The yellow peril's about to descend upon us, the gatling's jammed, the Colonel's dead.' This whole part of the speech shows a lot about Bamforth's character, showing humour, sarcasm and even a hint of Bamforth's r****t side (yellow peril). Bamforth then continues to speak from the general's point of view by adding, 'As if we hadn't got enough to worry about, we've got two thousand Jocks up the jungle suffering from screaming ab-dabs and going mad for women, beer and haggis. We're posting you out there Bamforth to relive the situation'. Bamforth then goes on to conclude 'So before I had time to relieve myself, here I was'. This whole speech also gives a sense of brutal honesty, the fact that they are more or less lost in the middle of the jungle with the 'yellow peril' about to descend upon them. The part of the speech about Bamforth there to relive the situation is again a sense of sarcasm from Bamforth. Overall, for Bamforth, I think that his character is very humorous for the reader with his wise-crack one liners and his disrespect for his superiors also makes things very interesting, but overall the author makes it clear that the other side to Bamforth is filled with sarcasm, r****m, and he almost cowardly about his attitude to the war. ...read more.

Bamforth affair. Mitchem thinks that Bamforth is bad for the army but the bottom line is that they are all there in the middle of the jungle and so that is why I believe that Mitchem moves on to commanding his troops so easily after his aggressive speech to Bamforth. The author put this speech where it was because he had to make the reader believe that even though Bamforth has a big mouth, even he could not speak against Mitchem. On the other hand he shows importantly for the first time, what Mitchem really thinks of Bamforth. The penultimate line of this speech is 'So you keep it five yards - dead. Anybody any questions?' Conclusion On the matter of the play and how far its story goes, I believe that from start to finish the play can be interpreted as an evolution - an evolution of characters whose true colours begin to surface when an outsider or enemy comes into the situation. Bamforth and Mitchem develop as two different roles, Mitchem as the leader and Bamforth as the demoraliser who defies his superiors. Bringing my analysis to a close, Mitchem and Bamforth were both intended as the main characters of the play for the depth of their roles but what author Willis Hall really portrays well is how they express themselves - through their honesty and the fact that they acknowledge the reality of the situation which is what makes the story so interesting. ...read more.