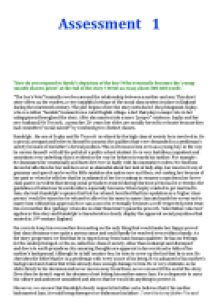 The Son's Veto. How do you respond to Hardys depiction of the boy? Who eventually becomes the young smooth-shaven priest at the end of the story ?

﻿Assessment 1 ?How do you respond to Hardy?s depiction of the boy? Who eventually becomes the ?young smooth-shaven priest? at the end of the story ? Write an essay about 300-600 words ?The Son?s Veto? basically revolves around the relationship between a mother and son. This short story offers us, the readers, a very insightful critique of the social class system in-place in England during the nineteenth century. The plot begins where the story introduced the protagonist, Sophy, who is a rather ?humble? human from a rural English village; a fact that plays a major role in her unhappiness throughout the story. After she marries into a more ?proper? existence, Sophy and her new husband, Mr Twycott, a preacher 20- years her elder, are socially forced to relocate because they had committed ?social suicide? by combining two distinct classes. Randolph , the son of Sophy and Mr Twycott is refined by the high class of society he is involved in. ...read more.

When Sophy wanted to get married to Sam, she took Randolph's opinion first but he refused, horrified that his reputation as a 'higher class person' would be ruined so he refused to allow for his mom to marry Sam and made her swear not to marry him without his approval. How can a son who eventually becomes a well-respected priest treat his own mother like ?garbage? when she is older than him? I guess the proverb, ?Like Father, Like Son? applies in this story and Randolph?s characteristics clearly display the apparent social prejudices that existed in 19th century England. For a son to keep his own mother from acting on the only thing that would make her happy proved that class divisions were quite a serious issue and could hardly be resolved even within a family. As the story progresses, we find that he is ripped away from basic human qualities- he has no feelings for the underprivileged, or the so-called low class of society, other than contempt and disrespect and down to earth prejudices. ...read more.

Lastly we can also see that Randolph is very self-centred and selfish as he does not care about his mother’s feelings and only cared about his own views and beliefs. Sophy is always left alone ever since her husband passed away without a companion. Randolph is always out and becomes a successful young smooth-shaven priest. Like Eve and Adam……….every woman need a man as their companion to complete each other through marriage is a social union or legal contract between people called spouses that creates kinship. The definition of marriage varies according to different cultures, but is usually an institution in which interpersonal relationships, usually intimate and sexual, are acknowledged. How can Sophy’s son (priest) cannot understand or helped his other by the can guide, help everyone else towards the right path of life? In conclusion, Randolph is very stubborn that does not care about the well-being of others (mom) but himself. Resources http://www.eliteskills.com/analysis_poetry/The_Sons_Veto_by_Thomas_Hardy_analysis.php http://www.antiessays.com/free-essays/107224.html http://www.enotes.com/the-sons-veto/q-and-a/discuss-theme-relationship-storythe-sons-vetoby-258135/ PS : I owe A LOT to these resources ï ...read more.