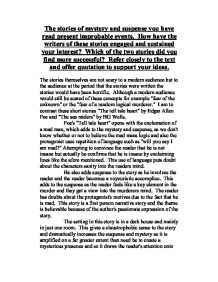 The stories of mystery and suspense you have read present improbable events - How have the writers of these stories engaged and sustained your interest? Which of the two stories did you find more successful?

The stories of mystery and suspense you have read present improbable events. How have the writers of these stories engaged and sustained your interest? Which of the two stories did you find more successful? Refer closely to the text and offer quotation to support your ideas. The stories themselves are not scary to a modern audience but to the audience at the period that the stories were written the stories would have been horrific. Although a modern audience would still be scared of these concepts for example "fear of the unknown" or the "fear of a random logical murderer." I am to contrast these short stories "The tell tale heart" by Edgar Allen Poe and "The sea raiders" by HG Wells. Poe's "Tell tale heart" opens with the exclamation of a mad man, which adds to the mystery and suspense, as we don't know whether or not to believe the mad mans logic and also the protagonist uses repetition of language such as "will you say I am mad?" ...read more.

The death of the old man or the mad mans plan shows no logic whatsoever and is focused onto one character, this greatly adds to the suspense as it once again draws the reader into the story and creates a sense mystery as the mad man kills the old man due to his eye being covered by a crust and the fact that he fluctuated from the beating of his heart to the eye shows more illogical thinking. The writer uses many linguistic tricks to sustain the reader's interest, for example he uses the repetition of sanity to show that the character is insane "How then, am I mad?" He also uses the repetition of words and phrases to show that the characters line of thought is irrational and full of pandemonium. He always includes the reader as it creates more suspense as the reader feels like an accomplice. He uses a mixture of short, sharp sentences for sudden actions and makes use of long sentences with commas, ands, and hyphens to create suspense and show that the character is confused. ...read more.

The story shows that the octopus is a random killer but it is a logical one, which makes it, even more of a scary thought, as a killer with intelligence is worse than one that is stupid. The theme to this story is the opposite of that of Poe's but it still carries the same underlying effects. It is controlled, calm, logical and scientific so the reader is more inclined to believe it and therefore be shocked as it is both unknown to the common man and to science. The author uses conditional words and phrases to add to the mystery for example "it seems..." or "it might be..." The author also refuses to have the characters jump to conclusions and these emphases the scientific nature of the prose; it makes it more like a calculated scientific report and hence makes it more believable for the readers. I believe that Edgar Allen Poe is more successful purely for the reason that I found that his story drew my attention a lot more and kept my interest focused on the story at hand although both authors use many different techniques to grasp and sustain the readers interest. ...read more.