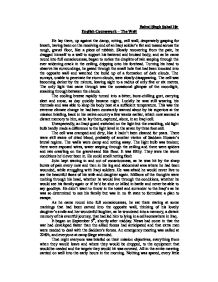 Balraj Singh Sohal 10r English Coursework - The Wait He lay there, up against the damp, rotting, cell wall, desperately gasping for breath, having been on the receiving end of an Iraqi soldier's fist and tossed across the rough, gravel floor, like a piece of rubbish. Slowly recovering from the pain, he dragged himself to a wall to support his battered and bruised body, and as he came round into full consciousness, began to notice the droplets of rain seeping through the ever widening crack in the ceiling, dripping onto his forehead. Turning his head to observe his surroundings, he gazed through the small hole that had been knocked into the opposite wall and watched the build up of a formation of dark clouds. The sunrays, unable to penetrate the storm clouds, were slowly disappearing. The cell was becoming darker by the minute, leaving sight to a radius of only five or six metres. The only light that came through was the occasional glimpse of the moonlight, sneaking through between the clouds. The cooling breeze rapidly turned into a bitter, bone-chilling gust, carrying sleet and snow, as day quickly became night. Luckily he was still wearing his thermals and was able to keep his body heat at a sufficient temperature. This was the extreme climate change he had been constantly warned about by his superiors at the mission briefing, back in his native country ...read more.

Stepping off the helicopter, after a torrid flight, he could call back to mind the complete contrast in atmosphere, than that in the helicopter. There was a buzz around the whole base, everyone was busy and the base felt as though it was alive. It gave a huge morale lift to the regiment after the depressing atmosphere during their flight. The sun was shining brightly, the sky was blue and there was a cooling breeze, it was perfect weather. The smell of the fresh breeze gave John a lift and all he heard was good news from those working there, about his fellow soldiers. News kept flooding on the good progress of the U.S forces in the south and the British forces in the west, but the news wasn't as good in the north, there were huge firefights going on in the city, but the allied forces were holding out well. Though the good news rapidly turned sour, the first and second regiments had walked into trouble in northeast Iraq. They had been ambushed on their way to help out their colleagues. Half of the regiment had been left dead, with numerous others injured. Those who had survived were fleeing for the Syrian border. The atmosphere around the base transformed as well. There was panic, everyone was shouting and rushing about, it was a sharp contrast to the atmosphere just a few hours earlier. ...read more.

All he could think about were his family and his funeral that was if they would ever get his body back. As the door of the execution chamber opened, the smiling face of Lieutenant Carter greeted him. Shook by utter disbelief he shouted: "You bastard!" Lieutenant Carter was one of the survivors from the ambush. He stood there smiling and greeted him with the words: "I'm sorry I had to meet you under these circumstances but you have to be eliminated. I'll give my commiserations to Sarah (his wife)" John repeated the seven-letter phrase again and again, but it couldn't help him, he was to be executed. John made one last attempt to get away but was stopped in his tracks by Carter's bodyguards. By force, he had his head laid on a table ready for his death. The executioner raised his axe; John took in one last breath before his death, when a deafening noise halted the process. Tanks and soldiers stormed through the walls; there was panic amongst Carter's men. The U.S forces had arrived just in time. They obliterated the opposition with a powerful range of weapons. No one was spared, the building was blown to shreds and the opposition were eliminated. Lucky to escape with his life, John, with great relief thanked his allies. The final mission objective was complete. It was a day John would never ever forget, as he walked out of that building, with his body still intact. ...read more.