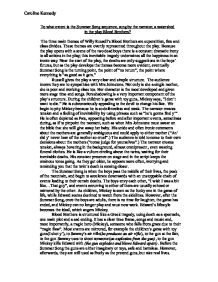 To what extent is the Summer Song sequence, sung by the narrator, a watershed in the play Blood Brothers?

To what extent is the Summer Song sequence, sung by the narrator, a watershed in the play Blood Brothers? The three main themes of Willy Russell's Blood Brothers are superstition, fate and class divides. These themes are overtly represented throughout the play. Because the play opens with a scene of the two dead boys there is a constant dramatic irony to all actions in the play; this inevitable tragedy undermines all the happiness in an ironic way. Near the start of the play, the deaths are only suggestions in the boys' futures, but as the play develops the themes become more evident, eventually Summer Song is the turning point, the point of "no return", the point where everything is "as good as it gets." Russell gives the play a very clear and simple structure. The audience knows they are to sympathise with Mrs Johnstone. Not only is she a single mother, she is poor and working class too. Her character is the most developed and given more stage time and songs. Foreshadowing is a very important component of the play's structure. During the children's game with toy guns, Mickey says, "I don't want to die." He is subconsciously appealing to the devil to change his fate. We begin to pity Mickey because he is so defenceless and weak. The narrator creates tension and a feeling of inevitability by using phrases such as "he's gonna find y'" He is often depicted as Fate, appearing before and after important events, sometimes during, as if to pinpoint the moment, such as when Mrs Johnstone must swear on the bible that she will give away her baby. His snide and often ironic comments about the mothers are generally ambiguous and could apply to either mother ("An' did y' never hear of the mother so cruel".) The audience is told to come to their own decisions about the mothers ("come judge for yourselves".) The narrator creates tension, always hovering in the background, almost omnipresent, even wearing funeral clothes. ...read more.

"Haven't got a care," This adds to the image of innocence. It is foreshadowing later, when the boys' heads, especially Mickey's, will be full of worries and doubts. "Lambs in spring," creates images of innocence. After spring, the lambs are slaughtered, so this can be interpreted as ominous. "But leave them alone, let them go and play," says the Narrator, referring to the previous line. It feels almost as if he is playing with us, stringing out their future, prolonging the time until their deaths. This adds to the idea of him being fate. "The radio's singing dreams," This line is there to show that the children were living in a kind of alternate reality. "You can't understand how living could be anything other than a dream," This adds to the idea of innocence and naivety. We feel sorry for the characters at this point, because they are so weak and helpless. The lyrics that fit into the Time category are: "Paradise," This refers to the Garden of Eden, and how it was eternal, until woman corrupted it. This could be construed as a reference to Linda tearing them apart."Switches off the chippy light," The children are moths, and have always had a light to follow, someone to tell them what to do. Now there is no light to go to, they must make there own choice. A light going out can also mean death - another reference to the inevitability of the twin's deaths. "Midnight hour, at seventeen," Where midnight is the pinnacle of the night, seventeen is the pinnacle of the boy's lives. It is nearly the dawn of their death day. This quote also has echoes of a modern Faustian pact (Faust made a pact with the devil, which came at midnight to take his soul) the midnight hour is also linked to witches, and the story of Cinderella. The lyrics that refer to Linda are: "Girl in the middle," She is torn between the two boys, in a tug of war that they do not realise is happening yet. ...read more.

When the three exit he says, "and only if the three of them could stay like that forever," As if the picture he took could have been more than just a snapshot. It makes you wish time could have stopped. The music of the song is matched to the actions and words. The narrator is always hovering in the background, waiting for a chance to become part of the scene. He is a constant presence throughout so the audience are never relaxed. They are always waiting for him to introduce another twist in the story. Before the Summer Song, he is quite far away, usually in a corner. During it though, he is allowed to come closer to them, and his "threats" become much more dangerous. "The devils got your number...he's staring through your window" changes to "He's screaming right inside you". The proximity of the narrator to the characters affects the tension of the scene. The overall message of the play is that the inequality of classes is very bad thing, which is enforced as we watch the brothers grow from babies to men, and watch them die. We become attached to them, and regret their death, almost as if it's our own fault. The song is when they make the transition from boys to men, and when they become their own people and their true feelings begin to show. Mickey represents the lower class, and Edward the higher. Linda is temptation and the narrator is fate. We see the lower class and the upper class tear each other apart. The second act is darker, as the dream world of child hood, which is reflected in the first half of the summer song, becomes the cold harsh reality of the 80s. I think that the message that Russell wanted to imprint upon the audience is: class is a cruel thing, tearing family and friends apart. The play made me feel sad, and shocked by how Mickey was driven mad enough to shoot his own brother. ...read more.