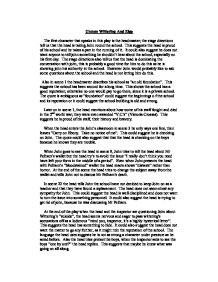 Unman Wittering And Zigo The first character that speaks in this play is the headmaster; the stage directions tell us that the head is taking John round the school. This suggests the head is proud of his school and he takes a part in the running of it. It could also suggest he does not want anyone to tell john something he shouldn't hear about the school, especially on his first day. The stage directions also tell us that the head is dominating the conversation with john, this is probably a good time for him to do this as he is showing john his authority in the school. However John would probably like to ask some questions about the school and the head is not letting him do this. Also in scene 1 the headmaster describes his school as "an old foundation". This suggests the school has been around for a long time. This shows the school has a good reputation; otherwise no one would pay to go there, since it is a private school. The quote is ambiguous as "foundation" could suggest the beginnings of the school and its reputation or it could suggest the school building is old and strong. Later on in scene 1, the head mentions about how some of his staff fought and died in the 2nd world war; they were even awarded "V.C's" (Victoria Crosses). ...read more.

In scene 5 Cary and John are talking in the green man, Cary makes another negative comment "they've landed themselves a couple of failures for masters in you and me" this suggests he thinks he is a failure and has lost any confidence he had in himself, also he once again fails to consider John's feelings about his comment. In scene 10 Cary is talking in the green man again, John meets him there. Cary says," The head likes to see the other staff there. I can't think why. I hate seeing him there" every scene Cary is in he will say something negative about the school or a teacher, this suggests he is a negative person. Later in the scene John tells Cary about the boys confession of killing Pelham. Cary says "splendid, ha ha, splendid! Hooray!" and the stage directions say he is "slapping himself with joy, and roaring with laughter" this suggests he is not taking John seriously or does not believe him. It could also suggest Cary knows its true, but does not want to believe John. Later on in the scene John says, "They don't care, the ones that didn't do it, will give alibi's for the ones that did" then Cary says, "Yes very neat. There must be some promising material in that form" this gives the impression Cary is humouring John. ...read more.

In scene 24 the boys threaten to teach John, "a little lesson", but John say's, "do you see this ruler? It's a good solid piece of ebony" "I will lay out the first one of you that touches me" this suggests that John no longer cares about the consequences of his actions; he has already lost his job so what can the head do. In scene 28, the head and the inspector about wittering's suicide are questioning John. The stage direction says John is "bemused" this suggests John is shocked by the affair, he answers all the inspector's questions quickly this suggests he can't believe what is happening. In the last scene John is talking to Cary at the green man again. When john hears what Cary has to say about "authority" he is devastated "I took over, I took over, I took over" this suggests he feels he is to blame. In conclusion the head is a disciplinarian who cares just about the reputation of the school, it could be assumed he knew of Pelham's murder but put the school first. Cary is a negative person that treats everything as a joke. John started of enthusiastic and ambitious (the complete opposite of Cary) and by the end of the play he hasn't got a job and doesn't believe in himself. ...read more.