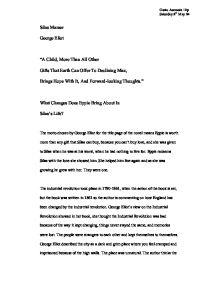 What Changes Does Eppie Bring About In Silas's Life?

Silas Marner George Eliot "A Child, More Than All Other Gifts That Earth Can Offer To Declining Man, Brings Hope With It, And Forward-looking Thoughts." What Changes Does Eppie Bring About In Silas's Life? The motto chosen by George Eliot for the title page of the novel means Eppie is worth more than any gift that Silas can buy, because you can't buy love, and she was given to Silas when he was at his worst, when he had nothing to live for. Eppie redeems Silas with the love she showed him. She helped him live again and as she was growing he grew with her. They were one. The industrial revolution took place in 1780-1861, when the action of the book is set, but the book was written in 1861 so the author is commenting on how England has been changed by the industrial revolution. George Eliot's view on the Industrial Revolution showed in her book, she thought the Industrial Revolution was bad because of the way it kept changing, things never stayed the same, and memories were lost. The people were strangers to each other and kept themselves to themselves. George Eliot described the city as a dark and grim place where you feel cramped and imprisoned because of the high walls. The place was unnatural. The author thinks the countryside is better because of the spaced settings, historical traditions and culture. ...read more.

He became excited and like a child at Christmas, he couldn't sit still. From time to time Silas would run to the door, open it , only to shut it again when he saw nothing but snow falling in the windy blizzard. It was as if Silas was expecting his money to magically appear on his doorstep. The last time he opened it, the clouds were clearing, and the snow was still falling but steadily. At that time there was a figure coming towards him but Silas paid no attention, only thinking about his money and feeling disappointed. As Silas was about to close the door he was caught in one in one of his cataleptic fits, and froze at the door with his hands still holding it open. When Silas unfroze he continued the action, which he had started. Walking towards the fireplace, he saw something that looked like his gold, reaching out to touch it, he found out it was a sleeping child. Silas was shocked; he thought his eyes were playing tricks on him because the child looked like his sister who had died at a young age. In his state of shock Silas believed the child was his sister. "Gold!-his own gold-brought back to him as mysteriously as it had been taken away! ...He leaned forward at last, and stretched forth his hand; but instead of the hard coin with the familiar resisting outline, his fingers encountered soft warm curls. ...read more.

In this last paragraph Silas acknowledges he has regained the ability to trust others because of Eppie's love. The author makes the lines memorable by using repetition "trusten" and rhyming the words "by" and "die". After Eppie and Aaron get married they return to the cottage with Silas. The ending of the book and the image of the garden represent a fairytale happy ending, with an image of love and the Garden of Eden. It shows Silas has achieved heaven on earth. "The garden was fenced with stones on two sides, but in front there was an open fence, through which the flowers shone with answering gladness, as the four united people came within sight of them." At the start of the book the weavers (Silas) are described as "the remains of a disinherited race"; at the end of the book Silas has come into his inheritance, which is becoming a member of the Raveloe community, when Eppie marries Aaron. The changes Eppie brings out in Silas' life are life changing; it was like he was born again. She teaches him how to love, live, and trust by loving him. As said many times Eppie is like an angel in disguise sent to guide Silas when he needed her the most; when he had nothing else to live for. Eppie is Silas' reason to live. ...read more.